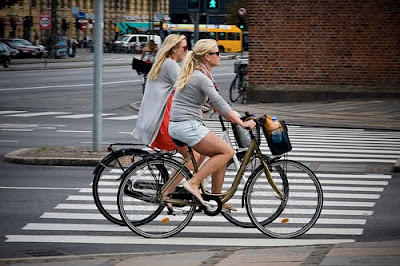 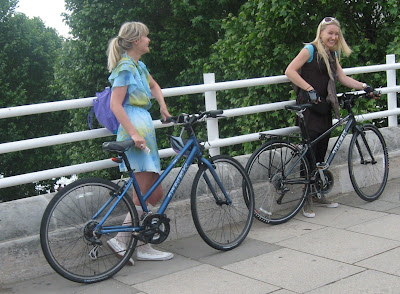 If you look for London cycling chic you can certainly find it: 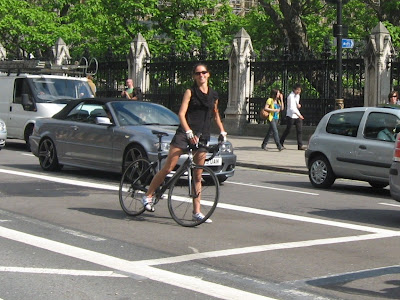 But there are two crucial differences. Firstly, people in Copenhagen ride quaint old-fashioned bikes with mudguards. Luckily we in Britain are blessed with a climate famous for its near-absence of rain, which is why most Londoners ride bikes without mudguards. Here in London we are also faced with a savage cycling terrain, which is why the mountain bike is de rigueur for negotiating potholes, broken glass, kerbs, mountains etc. Rather oddly, the Danes tend to carry things on their bicycles, whereas in London a bike is just there to get you somewhere and has no other real function. This is why British bikes are sold without pannier frames, panniers or baskets.

Secondly, people who cycle in Copenhagen display a scandalous disregard for basic road safety sense. Nobody wears high viz gear. Few bother with a cycle helmet. It’s as if cycling was a normal activity which did not require special equipment.

The following two photographs vividly illustrate the shocking difference between the two cycling cultures. In the first, a chic Copenhagen cyclist can be seen displaying a wanton disregard for her own safety. Where is the helmet? Where is the high viz gear? This woman is practically invisible and nobody could really blame a driver who ran her down (although I would not be at all surprised to discover that Copenhagen was one of those funny foreign places where a driver who runs down a cyclist is automatically held to be at fault unless they can prove otherwise – which is another reason for supporting UKIP in standing up for drivers' rights). 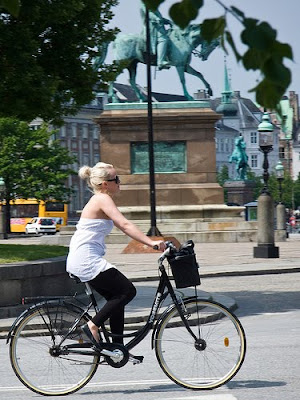 Now compare the wanton irresponsibility of the Copenhagen blonde above with the sturdy common sense of the chic London cycling blonde below. This young woman recognises that a cycle helmet can provide an attractive fashion accessory, holding the hair in place and keeping the head warm on cold days. She has also made every effort to make herself conspicuous to other road users. You can pedal around Copenhagen for months and you will never see anyone exercising this level of social responsibility, which is why in the final analysis London's cycling chic has the edge over Copenhagen's. Eat your heart out Mikael! 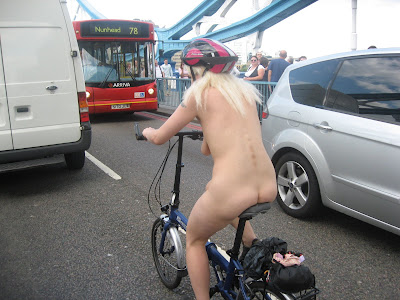