A cycling superhighway involves a thin strip of blue paint which is there to remind gutter-cyclists that we now have a Conservative cycling prime minister. It may also be used by drivers.

Driving superhighways involve devoting the full width of the carriageway to car parking and motor traffic, while permitting limited use by a small number of ‘vehicular cyclists’. In the example shown below (Winns Avenue E17) two lanes are devoted to car parking, one lane is occupied by one of those maddening ‘L’ drivers who is obeying the speed limit and driving cautiously, while the remaining road space is occupied by two drivers who, amid much angry blowing of horns, are racing each other as they attempt simultaneously to overtake the learner driver.

As any Vice-Trustee of the London Cycling Campaign will tell you, there just isn’t the space to create Dutch-style segregated cycling infrastructure on narrow roads like these. 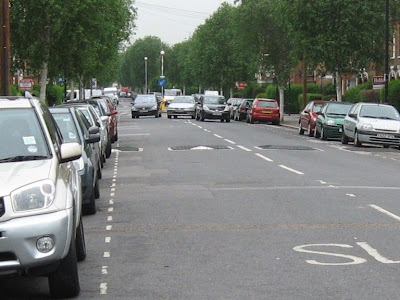 Posted by freewheeler at 10:08