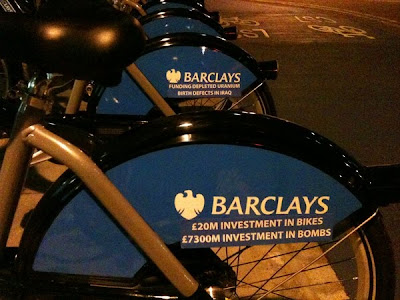 Jenny is not alone.

Carlton Reid, executive editor of BikeBiz, a trade magazine, said the London scheme, which follows the Vélib network launched in Paris in 2007, would have a "massive impact on cycling in London and elsewhere".

He added: "Britain had a very strong cycling culture through the start of the last century, but lost it from the Fifties, when cars filled our streets in greater numbers. That's starting to change and we can do it much faster if more people discover the convenience and joy of cycling through hire bikes. The London scheme could be a really important step in re-creating our lost cycling heritage."

Mr Johnson's utopia is for one in five journeys in the capital to be made by bike.

And now let’s have a reality check, shall we?

The greater London area has around 8 million residents. In most places, people make an average of around 2.5 "trips" by all modes each day, so that's around 20 million trips per day in total. If we assume that the bike hire scheme really does reach the number of trips that its proponents say, this means it has a capacity to replace one in 400 trips. 0.3% of the total. And that's the best case if they complete the scheme.

That's tiny. Barely a start, in fact. Where people really cycle they use their bikes an awful lot more than that. For example, here in Assen the population make just short of 1.2 bike trips per day (the population of 65000 make over 70000 trips, more than the total capacity of the London scheme). Up in Groningen that grows to 1.4 bike trips per day.

It's great to see anything which encourages people to cycle. However, this is not the sort of scheme which genuinely results in a large cycle culture. It can only ever be a small part of the picture.

It seems to me that public cycle hire is being picked on by many cities largely because it's the smallest thing can be done which will make it look as if something is being done. No longer do you need to do anything complicated and expensive like re-arranging the streets to make them more suited for cycling, or risk alienating motorists as you do it. Just allow a company to set up doing bike hire and the world's press will be amazed by your achievement.

And for some up-to-the-moment scepticism, see this.

Most Londoners never go near a bicycle all the year round. Whereas

On average, half of Amsterdam's population rides a bike at some point every day.

Euphoria about London bike hire, however, remains the order of the day:

Labour Assembly Member Val Shawcross said the new scheme was “one of a number of measure that are necessary to make London a safer and easier place for cyclists to get around.”

The bike hire scheme certainly makes short trips by bicycle in central London more convenient for the bike-less but it does not in any sense make London a safer place for cyclists to get around. Only infrastructure will do that. It is only a matter of time before we get the first bike hire fatality. So what does Shawcross mean? 'Safety in numbers' I suppose. A common mantra:

“The Institute of Advanced Motoring predicts that, with the critical mass of cyclists going up, drivers will be more aware and be looking out for people on bikes around town, hopefully leading to a more positive sharing of the road.

“Providing all parties behave courteously, and give each other the necessary space, the scheme will encourage more Londoners to take up cycling, and benefit from the health, economic, and environmental rewards it brings.”

‘Safety in numbers’ is always justified with reference to the Netherlands and Denmark, entirely missing the point that it’s not the numbers of cyclists there which creates the safety but infrastructure which effectively segregates cyclists from drivers. And even in those countries there are very significant variations in modal share, entirely rooted in perceptions of safety and the available infrastructure.

The euphoria around the bike hire scheme is rooted in the notion that mass cycling can be achieved through the medium of vehicular cycling. The belief seems to be that as more and more people cycle, an unstoppable momentum for change will be created and by some mysterious alchemical process in ten years London will be ‘like Copenhagen’. The problem with this argument is that even where London cycling has reached, by London's dismal standards, impressive proportions (1000 cyclists an hour on some commuter routes, 8 per cent modal share in Hackney) nothing whatever is being done in terms of providing the kind of infrastructure which will build on these figures and encourage mass cycling. Hackney, for example, is a rubbish borough in which to cycle. But other places which are touted as cycling cities – York, for example – are no better. Cycle planning in Britain remains an adjunct to the greater priority of planning for motor vehicle traffic flow and motor vehicle on-street parking.

Boris Johnson's Cycle Friday scheme has been scrapped after the total number of Londoners taking place dropped to just five.

At one meeting place just one Londoner turned up and at five others the rides were cancelled due to no Londoners turning up at all.

Which is a bit rum when there’s a ‘cycle revolution’ going on. But then most people in London have no interest in taking up cycling if it involves cycling in conditions like this (below). Photo taken yesterday on the A503, a commuter route from outer London into the West End. It's a typical main road in London, deeply hostile to cycling and with a wide pavement filled with an amazing collection of clutter. Beyond the lorry is a faded one metre wide cycle lane. 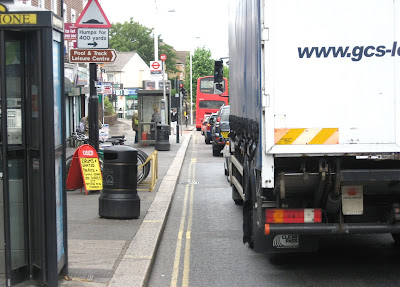 It’s worth bearing in mind that when it comes to euphoria, we’ve been here before. Back in 2000 London’s cycling campaigners were enthused by the vision of a modal share of ten per cent by 2012 – a target which is just, er, eight per cent short and which doesn’t stand the remotest chance of being achieved in the next 18 months. But, hey, amnesia is an essential condition of cycle campaigning. Let’s not dwell on the past, let’s just invent another fantasy target for ten or fifteen year’s time. And when that fails, another one will be invented. One in five by 2050!

Luckily I have the advantage of cycling around the London Borough of Waltham Forest, which the last time I looked formed part of London and where cycling’s modal share has for a long time flatlined at one per cent. Conditions for cycling are not only mediocre and off-putting, they are about to get worse, entirely as a result of a council which believes that economic regeneration is best achieved by encouraging people to drive short distances to their local shopping centres and by creating as much on-road car parking as possible.

London’s ‘cycling revolution’ has yet to begin, and the notion that Cycle Superhighways and the bike hire scheme are going to get the masses on their bikes is the stuff of fantasy. Vehicular cycling has failed, is failing and will fail.

As for exposure to risk and a deterioration in the conditions of vehicular cycling in London, here’s one more small example. Motorbikes in bus lanes.

The report clearly shows that allowing motorcycles into bus lanes is increasing collision rates for both cyclists and motorcyclists, and is encouraging motorcyclists to break the law more. On this basis, the only defensible decision is to stop the trial immediately, to minimise further casualties.

Instead, the Mayor has chosen to gloss over the casualty increases and continue the trial. The proposed education and enforcement is an obvious attempt to reduce casualties to a more acceptable level.

This trial proves that allowing motorcycles into bus lanes increases road danger, both for motorcyclists and cyclists. It should be stopped forthwith and no further trials to be conducted.

By the way, the first photo in this post taken from here. Which reminds me, on the positive side, at least the bike hire scheme is helping to promote the fortunes of a bank which is heavily involved in financing the arms industry, which can only be Good For The Economy:

Barclays and Royal Bank of Scotland are bankers to four of the biggest ten arms firms. Last year the UK topped the list of global arms exporters with a record £10 billion ($19 billion) in orders, more than any other country. 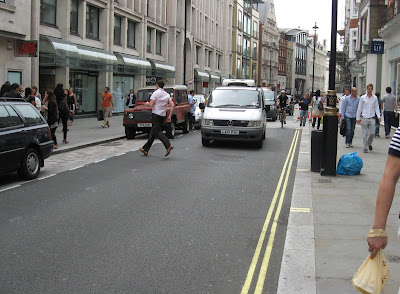