If any blame was the cyclist’s perhaps he had been riding a tad too close to a line of parked cars, but safer that than too far out into the road.

On the contrary, cycling in the middle of the road in this situation is the correct position to take. The problem is that you are then perceived by drivers as wilfully obstructing them and subjected to the blowing of horns or the screaming of obscenities.

Having made her confession of sin, Hill then rambles on, the sub-text of her piece being bloody cyclists.

When I was in London last week and my taxi was stuck in Piccadilly, the cabbie and I commented on the number of cyclists weaving in and out of the heavy traffic, ducking and diving between lanes and buses and lorries. Few of them wore helmets, they all ignored the red light, they ignored the rule I had drummed into me as a learner driver – ‘look first, then manoeuvre.’ They mostly do it the other way round.

But that’s an ignorant car-centric perspective. The reason why cyclists behave like this is that London is a city which promotes cycling while absolutely refusing to provide a safe, fast, convenient cycling infrastructure. London is an astonishingly backward, car-centric city where the pathology of fossil fuel addiction is naturalised by its transport establishment. What is Susan Hill, who is apparently an able-bodied woman, doing travelling by taxi in Piccadilly? Why isn’t she walking, cycling or using public transport? Does she even reflect that the reason she is 'stuck in Piccadilly' is that Piccadilly is a site which, absurdly, is clogged by cars and taxis. In any civilised society Piccadilly would be empty of private motor traffic and taxis and the only available surface transport modes would be walking, cycling or trams.

We are such polyps. Look at the human body, then look at a bus, or even a small car. No contest.

Which is why it makes sense to segregate cycling from high volume motor traffic. But that would impinge on the 'right' to drive or park a car in central London, or even use a taxi.

A friend of mine was killed when a delivery lorry pulled out sharply in front of her as she cycled through Covent Garden. I am amazed it doesn't happen more often and my cabbie had a few choice words to say about bikes.

This seems a very muddled piece of writing from someone who is a professional writer. Her friend was evidently not at fault when she was killed by a lorry, so why are the opinions of a taxi driver introduced? I imagine most London cyclists have a few choice words to say about cabbies. 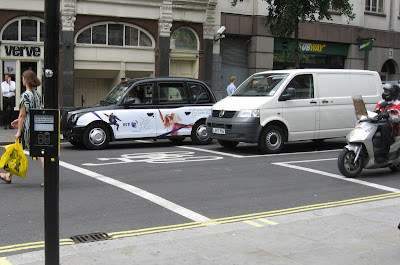 Posted by freewheeler at 11:35