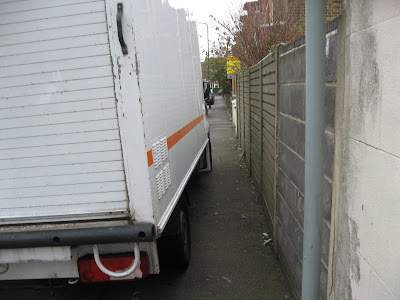 In Bristol they have all kinds of problems with cars parked on the pavement. If you complain to the local police, they point out that pavement parking is no problem at all to anyone on a diet.

How the poor pedestrians of Bristol must bitterly regret that they do not have the good fortune to live in a progressive London borough at the cutting edge of Green transport planning.

Here in the London Borough of Waltham Forest the council has a rigorous approach to the problem. Pavement parking is banned throughout the borough. Except on roads where it isn’t. And every year the council adds more and more roads to the exempted list. There are now so many – hundreds of ’em – I have quite lost count.

However, where footway parking is permitted special markings on the pavement ensure that no driver ever obstructs it. Like here on Orchard Street (such a lovely green name) in Walthamstow. 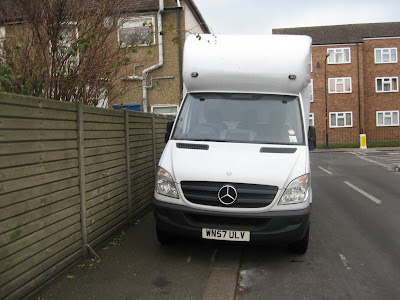 Interestingly the £90 permit charge on this van reveals to those of us who take an interest in these matters that this is a second vehicle.

Please note that this is not a business vehicle but entirely for private residential use. (I expect the resident needs it for that big weekly shop at Tesco.) 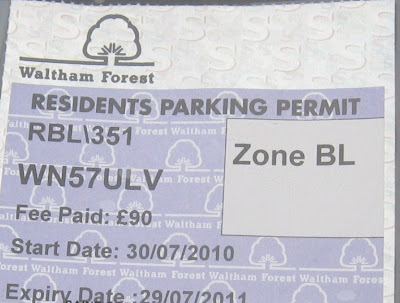 If the resident’s first vehicle is a private car (and I think we can safely guess that it is) the Controlled Parking Zone fee for that is £30 a year. So that means for a grand total of just £2.31p a week this resident can park two vehicles including this van on the pavement.

Whereas if you pay cash and get on a London underground train at Walthamstow Central and get off thirty seconds later at the next stop, Blackhorse Road station, it will set you back £3.50.

There is no economic logic at all to vehicle dependency of this sort. Discouraging walking and degrading the urban environment in this way is actively encouraged by this kind of lavish subsidy. But this is not a topic for discussion, either at the council or at the London Assembly.

And as I like to keep pointing out, when the topic of parking came up for consultation by the London Assembly both the London Cycling Campaign and Living Streets couldn’t be bothered to respond.

Because parking has nothing at all to with cycling and walking, does it.
Posted by freewheeler at 09:49