Over at ibikelondon Mark has re-ignited the segregation debate with further contributions from Joe Dunckley, The Lo Fidelity Bicycle Club, and Carlton Reid.

Mark’s post is inspired by the programme of the UK Cycle Campaign conference in Edinburgh, in particular a presentation on segregation by Roger Geffen of the CTC. Me, I note that the conference includes a session by a Sustrans man entitled Reasons to be Hopeful.

If you want to know what’s wrong with this conference you need look no further than the photograph below, which is captioned Cycling up the Mound on the cycle lane - a successful Spokes campaign. 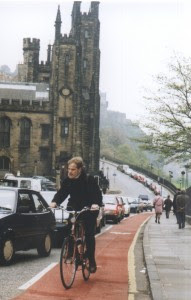 Sadly, this is just the kind of crap cycle lane which on the one hand excites vehicular cycling campaigners and on the other helps to deter most people from cycling. Firstly, the cycle lane is far too narrow. Secondly, it’s edged by a broken white line, which means drivers can legally enter it at any time. Thirdly, it’s protected by a single yellow line, which means that parking in the lane is permitted at certain times (probably before 8.30 am, after 6.30pm, and on Sundays). Finally, does it run the full length of the street? Perhaps not.

My final proof of the crappiness of this supposedly exemplary cycling infrastructure is the scene itself. If it’s so marvellous why is it that all the road users are in cars and there is just one solitary cyclist? It’s a photograph of failure, yet the organisers of this conference can’t even recognise the fact.

Cycling’s modal share in Edinburgh is 4-5 per cent (depending on where you go for your statistic). The council has signed up to a charter

“To set a target of at least 15% for the share of cycling in the modal split of trips for the year 2020 and of further growth if this target already is achieved.”

To achieve a 10-11 per cent increase in modal share in just ten years is massively ambitious and it certainly won’t be achieved by implementing the kind of cycle lane shown here.

Are there ‘Reasons to be Hopeful’? In Scotland 53% of all car journeys are less than 5 miles, so the scope for a massive transformation is certainly there. Cycling Scotland did a very interesting submission to the Scottish parliament, based on its own research:

Fear of traffic and feeling unsafe on the roads is the major deterrent. Other comments such as a lack of road space and good routes also support the idea that people don’t like cycling on the roads in Scotland.

When looking at the solutions people suggested for overcoming the barriers identified for cycling, the overwhelming request seems to be for segregated cycle facilities, away from traffic where possible

Other suggestions from the Public
Actions rather than words
People want tangible encouragement to cycle, not just advertising messages with no substance behind them.

Cycling Scotland’s View
The overwhelming response from the public consultation was that people do not like cycling amongst traffic, and would be encouraged to cycle by better segregated facilities, either on or off-road. Evidence from other countries with high levels of cycling shows that this is a key factor in getting more people cycling, but it also needs to be supported by traffic reduction measures, good quality trip-end facilities such as secure bike parking, high quality multi-stage cycle training for children and adults, promotion and events and measures to discourage car use.

This is unequivocal. Unfortunately when you look for a tangible commitment to begin a programme of segregated infrastructure on the Dutch model you don’t really find it. Even Cycling Scotland quickly waters down its own findings by uncritically embracing the kind of bland policy statements which are the bane of British cycling culture:

The commitment demonstrated by local authorities to cycling is growing. In April Fife Council launched a Cycling Charter, and in May, Edinburgh City Council signed the Charter of Brussels at the Velo City conference committing the city to a 15% cycling modal share by 2020. Glasgow City Council has embarked on a city-wide Cycling Strategy and Aberdeenshire Council launched a new Cycling and Walking strategy in the last few weeks.

Charters, strategy documents, amazing cycling targets - these are always good for cheering up campaigners, and they need it in Glasgow, where Fewer than 1% of journeys are made by bike.
The good news in that city is that it will only

take 127 years to implement 20 mph zones across the city

though the council is a little too radical for the local cycling group, which is indignant at the suggestion that dedicated off-road cycle routes might be better than vehicular cycling, and presses the case for on-road cycling facilities.

Over in Fife they talk a lot about segregated provision (“where practicable” – and we all know what that means, don’t we?) but its best practice photo is unlikely to impress David Hembrow.

As for Aberdeen Council. Its website has this lovely picture of these two front-line troops appropriately dressed for battle and holding the council's cycle route map prior to facing the challenge of the local streets. 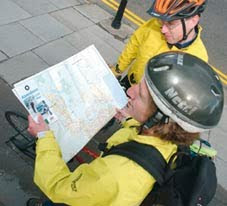 Posted by freewheeler at 10:27