Last year, after a moment of blind terror while cycling south on the A112 in Walthamstow, I identified a potentially fatal design flaw in the road layout – a point where the cycle lane follows the kerb and swings slightly to the right at the very point where drivers are forced over to the left by the road markings and a central barrier. It creates a situation whereby a cyclist who is overtaken here by the careless or inattentive driver of a large vehicle like a lorry, is at risk of being hit.

In the eighteen months since I blogged about this potential death site the council has modified the cycle lane. It has now been painted pink. You can see for yourself what a difference this has made. 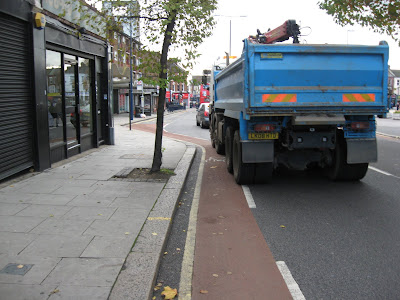 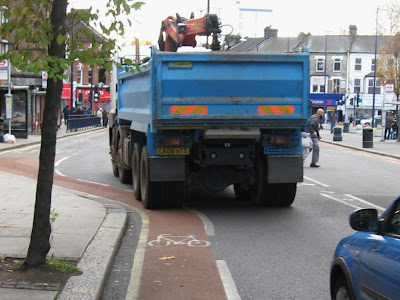 (Below) Looking back at the point of conflict. To add to the danger for cyclists the cycle lane makes a sharp, unrealistic turn, following the line of the kerb, at the point where the road widens and splits into two lanes, with the lane nearest the kerb a 'left turn only' lane. Since most cyclists are likely to be going straight ahead the choices here are (i) to slow down to walking pace and stay in the cycle lane, which fizzles out at the bus stop, then starts again later, continuing to a much-ignored Advanced Stop Line. This encourages undertaking alongside the 'left turn only' lane. (ii) continue directly on, which involves cutting across in front of overtaking traffic in order to reach the outside lane, which is 'straight ahead only'. If the overtaking vehicle is intending to turn left this results in conflict. This is not the kind of road lay-out which is going to encourage anyone to cycle other than the most traffic-hardened cyclist. You certainly wouldn't want to see children attempting this. But then very, very few children cycle in the London Borough of Waltham Forest, which is hardly surprising. 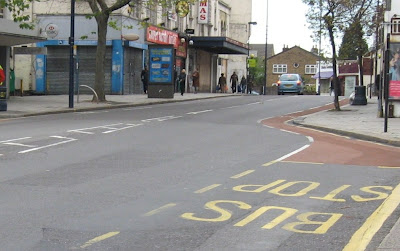 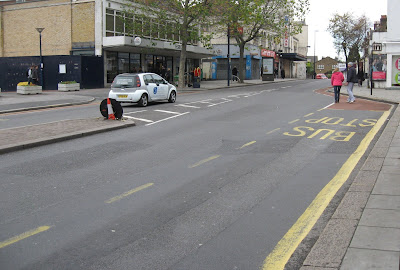