Cyclist down on Hoe Street

The Grumpy Cyclist spotted the aftermath of a collision involving one cyclist who appeared to have been knocked off his bike by a car on Hoe Street near the Queens road lights.

By the sound of it this wasn’t an injury collision, so it won’t be recorded in the road casualty figures for London 2010.

When it comes to injury crashes in Waltham Forest, last year cyclists were involved in collisions on average once every four days.

The photograph below shows the conditions for cyclists on Hoe Street near the Queens Road lights. 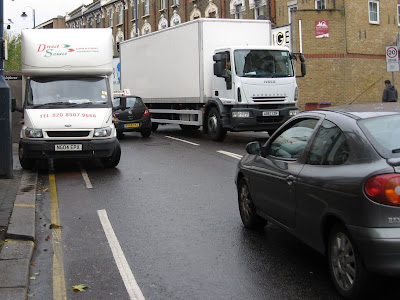