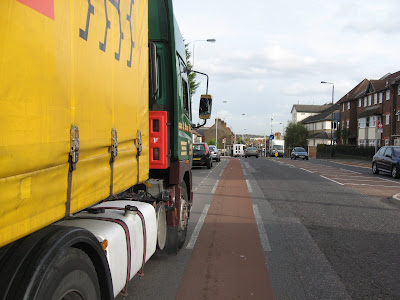 Yesterday I was out on the A503 enjoying the kind of prize-winning cycle lane that gets the thumbs up from the local LCC group (it’s that all-important space between the parking bays and the adjacent cycle lane which makes it cycling-friendly), when I suddenly realised I was in the lorry driver’s blind spot. This is the eastbound A503 just before the junction with Holmes Avenue E17. 12.45 pm.

Yes, all I could see in his broken mirror was the driver's shoulder, not his face.

Perhaps we should have schemes that let cyclists sit in the cabs of lorries which have broken mirrors, to illustrate how difficult it is for lorry drivers to see cyclists in a broken wing mirror. Or anyone else, for that matter! 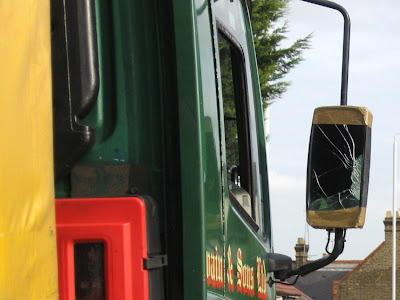 This massive lorry by the way is part of the Swain Group fleet, a road haulage business which boasts

We have a keen eye on the infrastructure and landmark projects needed when the Olympics come to London.

We're constantly reviewing our processes, training and the professional development of our people, as well as our sizable vehicle fleet, to ensure we retain the capability and flexibility to deliver that all important 'gold standard' service.

As I was taking my final photograph this police car (below) cruised by without stopping. Which is odd, really, because anyone found on a bicycle in the A503 cycle lane has almost certainly escaped from a lunatic asylum and should be taken in for questioning. Normal people just don’t do it. 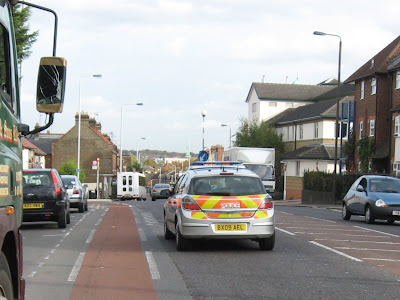 Posted by freewheeler at 10:29