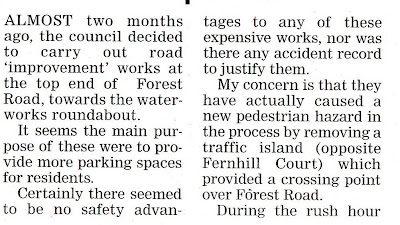 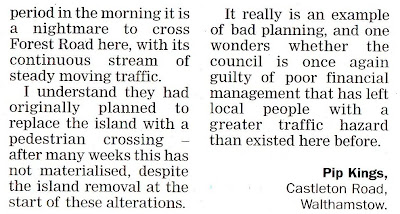 The so-called ‘Forest Road improvement scheme’ has been a catastrophe for cyclists, but as this letter from the current issue of the Waltham Forest Guardian shows, it is also bad news for local residents who prefer to walk rather than drive. The promised crossing has failed to materialise, even though this location is a strategic route for any local resident wanting to walk to Wood Street station.

Let’s recap. Almost a quarter of a million pounds has been spent on a scheme which creates around 20 parking bays on the footway, narrowing the width for pedestrians to as little as just over a metre (the transport planners said this wouldn’t happen but they were lying). They promised a new pedestrian crossing but then left it out. They said the scheme was to reduce vehicle speeds, then slipped into the traffic order (when it was too late to object) the announcement that on one section the speed limit was to be raised from 30 mph to 40 mph. They narrowed the road and relocated the cycle lane alongside the new parking bays, bringing cyclists much, much closer to lorries and buses, while creating an entirely new danger in the form of ‘dooring’. The ‘improvement’ has already resulted in total obstruction of the footway by a parked car, and by drivers ignoring the marked out bay and parking on the adjacent footway.

This scheme attracted no comment from any individual or organisation other than this blog. The local Green Party takes little interest in transport and has been silent. The local LCC branch has failed to utter a squeak of protest. The scheme is the work of the local Labour Party and Liberal Democrats, with, naturally, no objection at all from the Conservatives on the council. And yet this is the work of a council which has published innumerable fancy documents calling for more walking and cycling and less car use, in collaboration with Transport for London, which has likewise claimed to be keen to see more cycling and walking. Cognitive dissonance doesn’t get any starker than the gap between what the Forest Road Corridor scheme truly represents and the pious affirmations of walking and cycling which spew regularly from local authorities like Waltham Forest and from Transport for London.

Needless to say there has been no obvious reduction in vehicle speeds since the scheme was implemented. In a final touch the advisory flashing speed sign remains broken, as it has been for the past two years.

(Below) Complete obstruction of the footway for a wheelchair user, thanks to the car-sick transport planners of Waltham Forest council and its low IQ 'official' roads contractors J B Riney. 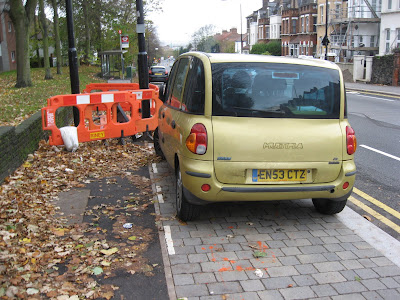 (Below) No matter how much you give a driver they will always take more. A driver impinges on the reduced footway space. 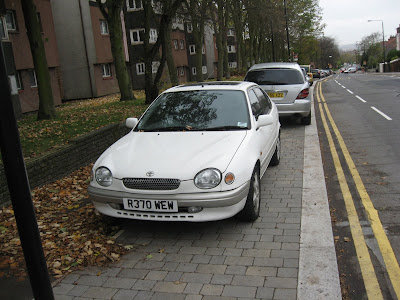