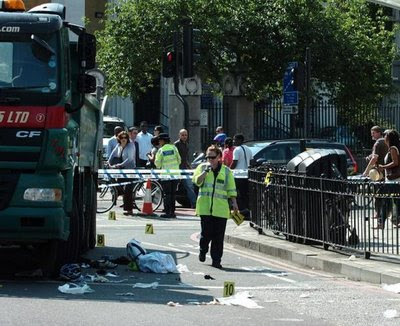 A tipper truck driver crushed a City boss to death under the wheels of his HGV while chatting on his mobile phone, a court heard.

Dennis Putz, 51, was over the legal drink drive limit when he hit cyclist Catriona Patel, 39, as he accelerated away from a set of traffic lights outside Oval tube station in south London.

Witnesses to the horrific crash described seeing her back and head be crushed by the rear wheels of the huge truck.

But Putz failed to notice he had run over Ms Patel - who had been wearing a high-visibilty jacket - and only stopped when pedestrians began hammering at his cab door, Inner London Crown Court heard.

'A forensic scientist has concluded that at the time of the crash, his alcohol breath reading was likely to have been 49mg - 50 per cent over the drink-drive limit.' Putz denied drinking that morning but said he had consumed seven pints of Guinness the previous day, stopping at around 9pm.

Mr Polnay dismissed the claim, saying the prosecution had calculated that his reading 'should have been zero' if this was the full extent of his drinking.

'He either had a great deal more to drink that night or he had something to drink that morning,' he said. 'Tests were carried out by police standing where Ms Patel was and there's no doubt that Ms Patel clearly would have been visible in the truck's mirrors.

'If Mr Putz had looked once in the 29 seconds they were both stationary he would have seen Ms Patel.

(Troublingly, only the Daily Mail seems to have bothered to send a reporter to cover the trial.)

As I have pointed out before, in the immediate aftermath of the killing of Castriona Patel someone signing themselves ‘Julie’ went into overdrive in comments boxes to exonerate the driver and to transfer blame to the victim:

My partner was the driver of the Lorry which was in the accident on Monday where sadly a woman cyclist died. I have read all the posts about this and some have been quite upsetting as a lot of comments have been way off the mark. My partner had not been drinking all night, he was safely tucked up in bed at 9pm watching TV with a cup of tea. He is an experienced HGV driver of 20yrs and has never had an accident. The cyclist came up on his left side and has sais he simply did not see her,he did check his mirror but she was in his blind spot.

‘Julie’ also posted a comment in the local paper, as well as here.

I have no idea if ‘Julie’ is who she claims to be or whether this is all simply the work of a malicious hoaxer, but either way someone went to some effort to muddy the waters and to damp down the surge of anger that runs through comments boxes after fatalities of this sort.

I would like to think that if the defendant is found guilty the LCC will be ready with a vigorous, carefully worded statement for the media which identifies the generally high level of criminality to be found in the road haulage industry (see this and this) and calls both for much greater roads traffic policing in London, together with an immediate one year driving ban to be imposed on anyone driving with a handheld mobile, and for lifetime driving bans to be imposed on drivers who kill cyclists in such circumstances. I would also like to think that London’s cycling community, either in its formal or informal manifestations, would be capable of organising a show of feeling outside the court in response to any sentencing or disqualification which might be deemed inadequate.

For more on the topic of lorry drivers who kill cyclists see today’s Guardian.
Posted by freewheeler at 08:55