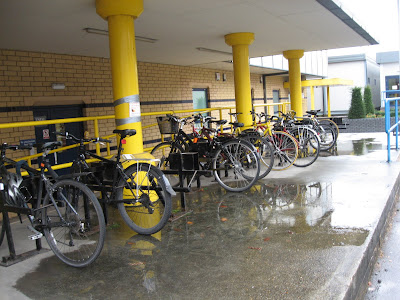 What’s the biggest car park in the London Borough of Waltham Forest? My own extensive researches suggest it is ‘Whipps Cross Hospital’, a magnificent car park with 400 bays for visitors and 700 bays for NHS employees.

Should you wish to cycle to the hospital, forget it. There are just 16 cycle stands, all grouped in one place (above). There are no signs to help you find these stands, which are of the kind designed by the Spanish Inquisition – the same kind which proved a major turn-off at the Walthamstow Bike Shed and outside Blackhorse Road tube station, where they had to be replaced by Sheffield stands. Luckily in those instances the local paper never found out about yet another example of council incompetence and financial waste!

The Whipps Cross Hospital website supplies an inaccurate cycling map which has obviously been created by someone who doesn’t cycle locally and which gives absolutely no information about cycle parking.

No surprise really, since Whipps Cross University Hospital is a diseased institution run by fossil-fuel addicts.

Another Waltham Forest cycling blogger draws some similarly acerbic conclusions after discovering that no cycle stands are supplied at either the St James Health Centre or the Forest Road Medical Centre.

Meanwhile elsewhere in London the land overlooking the River Thames at St Thomas’s Hospital is devoted to car parking, even though it forms part of what should be an attractive route for walking and cycling.

One of Britain's most-recognised medics

has had a little spot of bother.
Posted by freewheeler at 08:18