car parking and the suppression of cycling 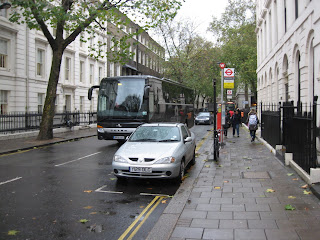 I took this photograph yesterday on Great Russell Street (London WC1). It sums up everything that’s wrong about London transport planning. A single residential parking bay has been slotted in by the local council’s car-centric planners. The first thing to say is that this parking bay is massively obstructive to all road users on Great Russell Street, as you can see from the way the coach has to swing out to get past. There’s conflict with oncoming vehicles, and there’s further pressure on any cyclist using this road. Every time you have to pull out round a parked vehicle you have to hope that the driver coming up behind you is paying attention. Even more absurdly the parking bay is sited right in front of a bus stop, which means that a bus can’t get past until there’s a gap in the oncoming traffic. So bus users are delayed. All for an empty car parked here for hours or days or even weeks.

This ludicrous example of urban planning exposes a central contradiction in Transport for London’s car-centric policy. At its core is the acceptance of cars as a primary transport mode and a desire to maximise its smooth flow and social use. For this reason pedestrians and cyclists are marginalised. Pedestrian crossing lights are having their crossing times reduced, some pedestrian crossings are being removed, and cyclists are refused extra facilities or road space because it would slow down motor vehicle flow. But obstructive car parking of the sort shown here is tolerated. The car must always come first. Not a single road in Greater London has had its space re-allocated to put the cyclist first but space can always be found for car parking.

The second thing to say is that the person parking here is enjoying a massive subsidy. They are not paying the true social costs of being allowed to park a disruptive ton of metal here for as long as they like (which for a resident with a CPZ permit means forever, as long as you continue paying the annual fee). In Waltham Forest a basic CPZ permit costs £30 (reduced from £45 by a car-centric Council). In central London it may be closer to £100, but that still works out at less than £2 a week.

The third thing to notice is that the two people who have parked their bicycles here have been forced to use a signpost and (on the other side of the road) some railings. No cycle parking has been provided. In fact I can’t think of any stands anywhere on Great Russell Street, or in the streets off it. 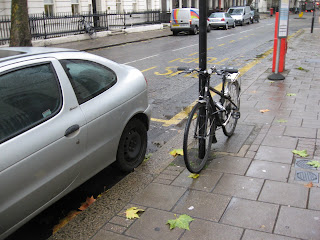 ‘But people must be allowed to park their cars!’ I hear some people cry. Fine. There’s a massive underground car park just up the road under Bloomsbury Square. But this might be unattractive to local residents on the grounds of cost. Usually you pay very much more to park in an off-street car park than you do to park in the street. That’s another absurdity. But while bus fares and train fares continue to shoot up, the infrastructure for drivers remains massively subsidised. And it’s never discussed. It’s part of the invisible world of car supremacy. And it’s the same all over London. It’s naturalised. Hardly anyone travelling along Great Russell Street whether walking, cycling or in a motor vehicle would see anything wrong about this scene. It’s accepted. It’s the society we live in.

It’s the same everywhere in London. A few days ago I took these photographs (below) on St Mary Road, Walthamstow. Between the junctions with West Avenue Road and Folkestone Road lies this property. It has off-road parking for at least four vehicles but the council has generously seized part of the pavement in order to slot in parking for one or two more vehicles. This makes no sense at all, other than to encourage the greatest possible ownership and use of motor vehicles. The cost of occupying this road and footway space is, for a driver, £30 a year. That’s less than 60p a week to rent part of a road and a pavement. This makes no economic sense at all, apart from all the other objections to car ownership and use. 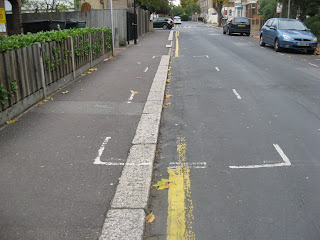 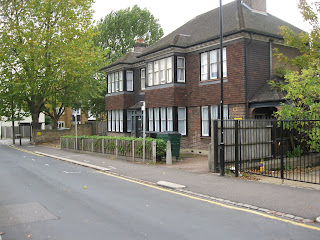 Meanwhile it is announced that

FREE 15-minute parking zones will be introduced in several streets to help boost local business. The move has come after residents and traders requested the Controlled Parking Zones on their streets to encourage people to shop locally.

I simply don't understand why people at TfL like Ben Plowden pretend to be so amazed at the very high levels of car use in outer London for very short journeys. TfL continues to promote motor vehicle flow and on-street car parking, and continues to deny cyclists a safe and convenient infrastructure. With every encouragement from TfL, things are going backwards from the middle ages into the dark ages here in Waltham Forest.

And the response from shopkeepers to 15 minutes of free parking?

Aruind Patel, owner of Coronation News in the High Road said: "It is a good idea to offer free parking but 15 minutes is not enough. You need something like at least 30 minutes. It is difficult because people can go to ASDA and Tesco and park there for free.

Omowale Quow, of clothes, books and gifts shop Mama Africa, said: "It is not really sufficient. If the council are serious about doing something for local businesses they should allow free parking all the time.

I would say we’re committing a crime against cycling when people continuously talk about promoting cycling without talking about deterring driving. Because that’s what’s actually happening. We’ve got a cycling promotion industry in the UK which refuses to contemplate the act of deterring driving. It’s always promoting cycling around the edges, not seeking to dismantle the central system of mobility in the UK, which is the car.