According to Transport for London (TfL) data released by Mayor of London Boris Johnson in response to a written question from Labour Assembly Member Murad Qureshi, only one in four of the first 92,000 members of the scheme are women.

However, the three-to-one male to female split revealed by the figures is in line with data from the Department for Transport that show that on average, men make three times as many trips by bicycle as women each year.

A spokesperson for TfL said: “We are doing everything possible to encourage women to cycle.We know that women's two main concerns when choosing to travel by two wheels are safety and changing facilities; that's why we are working extremely hard to make sure both of these continue to improve. Our Cycle Safety Strategy includes a whole raft of initiatives to keep cyclists safe.

“This includes signing a Memorandum of Understanding with the Freight Transport Association to get lorry drivers and cyclists sharing the road safely and training courses including adult cycle training to improve confidence and skill on the road.

Safety issues apart, concerns over feeling hot and sweaty at the end of a bike ride don’t seem to deter female cyclists in The Netherlands, where cycling in everyday clothes is the norm.

Marc van Woudenberg of the Amsterdamize.com blog told us that the gender split in the Dutch city is 55% women and 45% men

(Below) Transport for London’s new ‘road improvement’ in Walthamstow on the A503 involves moving the cycle lane closer to overtaking lorries, in order to create free parking bays on the pavement at cost of just £20,000 per bay. With attractive cycle lanes like these who can doubt that the women of Waltham Forest will be rushing to take up cycling? 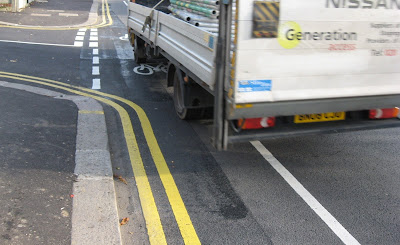 Posted by freewheeler at 11:13