take a message to Jennie 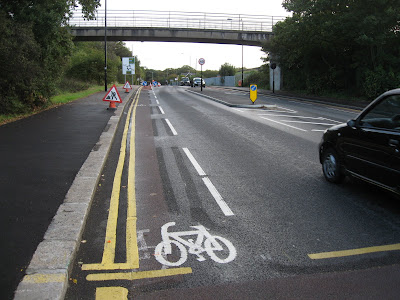 It’s interesting that among those doing presentations at this weekend’s great cycling conference is Jennie Calvert, senior policy officer at Transport for London.

She ought to be turned into toast but as this conference represents a cycle campaign establishment which has been failing cycling for decades I very much doubt that she will be. The absence of any speaker from the Netherlands says it all. The opening discussion is about the glorious future of cycling in Edinburgh and London. Let me assure you, dear reader, that there isn’t one – not on the clapped-out business-as-usual policies and strategies enshrined in the cycling policies of both car-sodden, car-dependent, car-prioritising cities.

Look, for example, at the recent CPRE report which devastatingly exposes TfL’s sloppy methodology in calculating cycling’s potential. Compare the modal share charts for European countries and note the extent to which Britain is a failed cycling state. Let’s ignore examples of high modal share from the Netherlands and Denmark. In Vienna they have managed to raise cycling’s modal share from 2 per cent in 2001 to 5 per cent today. It is apparently still rising. So what is Vienna doing that London isn’t? Any speakers from Vienna at the conference? No.

In the real world Transport for London is a major obstacle to mass cycling in London. Here in Waltham Forest it is actively collaborating with the council to make cycling more unattractive and more dangerous. My photograph shows one small section of some catastrophic ‘improvements’ to the eastbound A503, between Beacontree Avenue E17 and the junction with Woodford New Road (A104). It was taken on a Sunday, so traffic volume was much lower than on a weekday, with no lorries.

If you look carefully you can see the old cycle lane under the new one. What TfL have done here is to widen the pavement (possibly to install pavement parking bays – that was the original plan, anyway), and move the cycle lane closer to the centre of the road while simultaneously installing a refuge in the middle. At the same time the speed limit has been raised from 30 mph to 40 mph. This is a stupid, murderous design which brings cyclists much, much closer to overtaking lorries on a major road out of London with huge volumes of traffic. This ‘improvement’ (along with a number of other catastrophic re-allocations of road space for car parking elsewhere on the A503) puts an end to all hopes of a shift to more cycling on a major route like this. Only the most diehard cyclist will ever cycle in conditions like this. It’s total madness.
Posted by freewheeler at 11:08