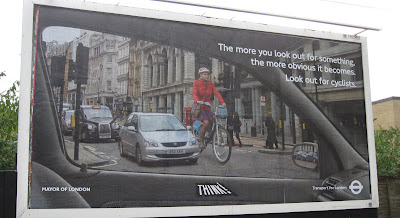 “The more you look out for something, the more obvious it becomes. Look out for cyclists.”

Now in the first place, does anyone seriously think that a single driver’s behaviour is changed by Transport for London posters bearing messages like this? I don’t. As far as I’m concerned posters like this are completely pointless. Where’s the evidence that the perceptions of non-cycling drivers are changed by this kind of pleading? As David Hembrow reminds us Most British people never, ever cycle at all, not even once a year. 79% of women are in that category. Posters like this are an insulting waste of money in a city which lacks even adequate cycle parking provision. But then TfL is no slouch at pouring money down the drain.

This fatuous poster captures the essence of the failed ideology of ‘road safety’. It’s about putting on the appearance of dealing with a problem (drivers who collide with cyclists because they are not paying attention) through 'education' , instead of addressing the root causes – lack of enforcement of road traffic law, risible penalties when offenders are apprehended, and a judicial system which treats even the killing of cyclists as a matter of no great importance, certainly not as important as the right to drive. The helmet that the model is wearing is an aspect of this ideology, requiring the individual to (supposedly) defend herself against road danger, while the source of the road danger is allowed to continue. In a city crammed with drivers talking on handheld mobile phones a poster like this is a sick joke. And when the TfL publicists pasted their enlarged cyclist on to the street scene it obviously didn’t occur to them (I don't expect anyone involved was a cyclist) that the driver beside the cyclist is far too close.

This poster represents an approach to the problem of inattentive drivers who crash into cyclists which matches that of the CTC and people like Carlton Reid. It’s about trying to make cycling safer by insisting that the true place for cyclists is among road traffic, and that what needs to be changed is not the infrastructure but the behaviour of drivers. The historical evidence for the failure of this strategy is clear – Britain is now one of the most backward cycling nations in Europe – but neither TfL, the CTC, Carlton Reid, the London Cycling Campaign, or the Green Party is at all interested in the example set by those countries and cities which have reversed car dependency and raised cycling’s modal share to a significant degree.

Quite simply, mass cycling will never be achieved through the strategy of trying to make drivers nicer to cyclists within the existing transport status quo. This strategy has never worked anywhere in the world. Insisting that Cycles are a vehicle and, as such, cycling should, wherever possible, take place on roads disregards the views of the overwhelming majority who don’t cycle and don’t wish to cycle in road traffic, whereas the strategy of separating cyclists from drivers and reallocating road space from the driver to the cyclist and pedestrian is the one approach with a proven record of success.

The other problem is that the hazardous and unattractive conditions of cycling are exacerbated by the sheer volume of London traffic, unwittingly symbolised in this poster by the presence of a black cab. Ironically, the road portrayed in the poster is plainly wide enough for infrastructure that separates cyclists from motor vehicles. But the CTC, Carlton Reid, the LCC, and the Green Party, like TfL, accept the existing vehicle-saturated road infrastructure and insist that change and mass cycling can only come through changing the behaviour of drivers. Hence campaigns like ‘I Stop at Red’ (to win respect), ‘I Pay Road Tax’ (to justify a cyclist’s right to the road), SMIDSY, ‘Three Feet Please’, ‘Share The Road’ and demands for a Strict Liability law. These are campaigns which aim to change nothing whatever about the road network. They exist in a vacuum, detached from all historical reality, as if the examples supplied by the Netherlands and Denmark did not exist.

I find it a bitter irony that this poster should be displayed on Selborne Road E17, a road which embodies many of the things which are wrong with cycling in London. Selborne Road has substandard cycle lanes which make cycling more dangerous, not less. Cyclists heading west are forced into conflict with overtaking traffic because of hazardous pinch points. If you are cycling east you have the problem that drivers use the cycle lane as a forward observation post for departing The Mall car park. Some drivers on Selborne Road are plainly driving at speeds in excess of 30 mph. The Advanced Stop Lines on Selborne Road are routinely disregarded. Selborne Road is a major bus route, and large numbers of buses and cyclists don’t mix. Beyond the bus station the cycle lane shrinks to a metre or less, which is worse than useless. And in a final twist, the new Tesco Express results in obstruction of the cycle lane throughout the day, as innumerable vans and lorries service the store. Selborne Road, in short, embodies lots of the reasons why cycling is unattractive to anyone but a tiny minority of hardcore cyclists. Selborne Road is also wide enough to permit the provision of safe, segregated cycling on the Dutch model.

(Below) Cyclists share the westbound cycle lane on Selborne Road with buses. 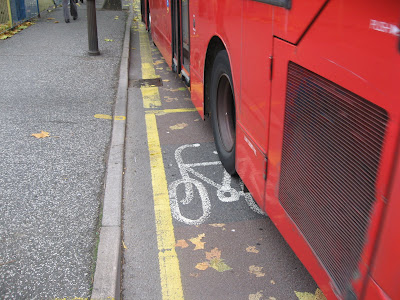 (Below) Tesco Express on Selborne Road gets another delivery. 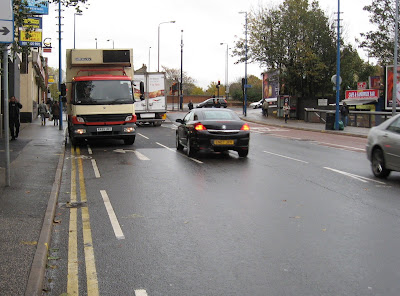 Posted by freewheeler at 08:42