"an excellent scheme for cyclists" 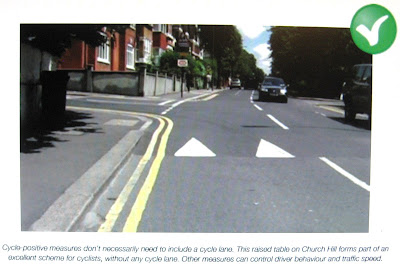 "Cycle-positive measures don’t necessarily need to include a cycle lane. This raised table on Church Hill forms part of an excellent scheme for cyclists, without any cycle lane."

Among the major obstacles to the development of mass cycling in Britain are cycling campaigners and cycle campaign groups.

That's an intriguing thought, is it not? Although there will always be exceptions, this seems to me to be generally true. Cycling campaigners tend to have a stunted vision of what is possible, are frequently ignorant of what has been achieved elsewhere in Europe, and do cycling no favours by praising to the skies infrastructure which is rubbish and which suppresses cycling for all but the hardcore cyclist. Britain's two main cycling organisations the CTC and LCC were set up by radicals but have long since lost their campaigning edge and have now become corporate members of the transport establishment. All they really want is an amelioration of the existing car-centric transport culture. They have no interest in seriously challenging it.

Locally, the Waltham Forest Cycling Campaign (WFCC) provides a good example of this thesis. On its website it asserts that the best cycling infrastructure in the whole of the borough is to be found at the Crooked Billet underpass. The fact that the council's own cycle counts show this underpass to be deeply unpopular with cyclists makes no difference to the ideologues of the WFCC. They know best. Failure stares them in the face but their confidence is unshaken.

Today's example is taken from Church Hill E17, shown above. This is at the heart of what is supposed to be a 20 mph zone (although in reality a car can easily reach 40 mph if the driver wants to). WFCC calls this speed table "part of an excellent scheme for cyclists". Oh yeah? Church Hill is a truly crap road for cycling on. Just beyond the speed table to the right of those trees lies Walthamstow School for Girls. How many of its pupils cycle to school? Hardly any, for very good reasons. Traffic comes unpleasantly close to cyclists along the entire length of Church Hill as well as on its extension, Prospect Hill.

What is dishonest about the WFCC photograph is that it obscures the reality that on this supposedly wonderful speed table the car-centric council has slotted in two parking bays. These have the effect of forcing westbound traffic over the middle white line, which has the effect of forcing eastbound traffic against the kerb. Conditions for cycling are hardly desirable even when traffic is only moving in one direction. Compare the WFCC photograph with these: 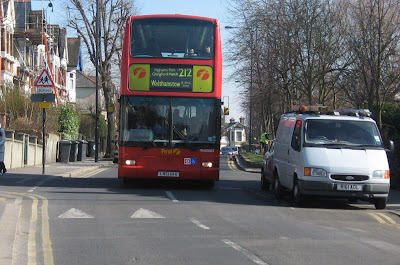 See how close buses comes (below). Note that the car following is beginning to move out over the central white line. 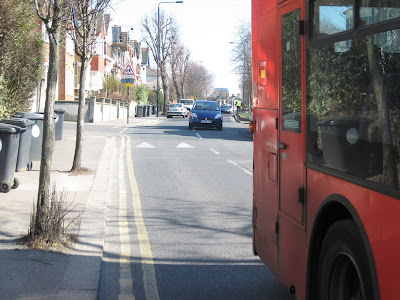 (Below) See how close traffic comes to a cyclist on the approach to the speed table. This is entirely the result of on-street parking bays on the other side of the road, which force drivers towards the kerb to avoid oncoming traffic. 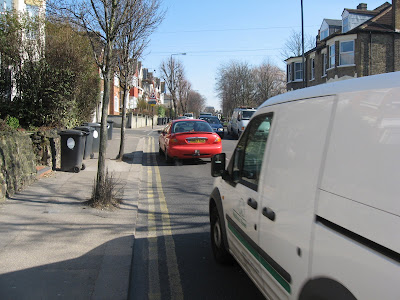 (Below) Take a look at this supposedly "excellent scheme for cyclists" from the other direction. In reality the parking bays on the speed table bring cyclists into conflict with motor vehicles from both directions. Road space which could be transformed into Dutch-style segregated cycling infrastructure is instead devoted to car parking. 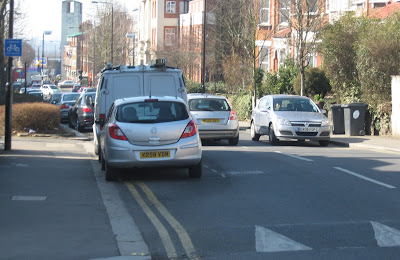 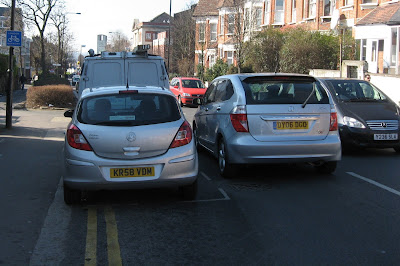 Once you have passed the supposedly cycling-friendly speed table, this (below) is what you can expect to encounter if you are heading west down Church Hill towards Hoe Street (A112). The incomparable London Cycle Network. It's crap. There's daily gridlock here as vehicles back up from the lights at the junction much further down the road.

The vast majority of the population of the London Borough of Waltham Forest have no interest in taking up cycling in conditions like this. And yet to the LCC's local cycling campaigners this street is perfection itself. 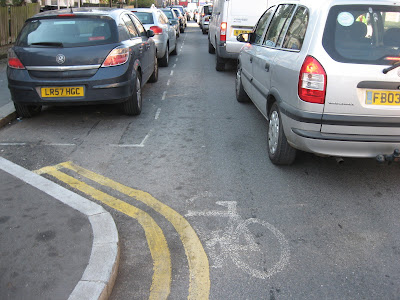 Posted by freewheeler at 09:07