Council spends money to find out about spending money 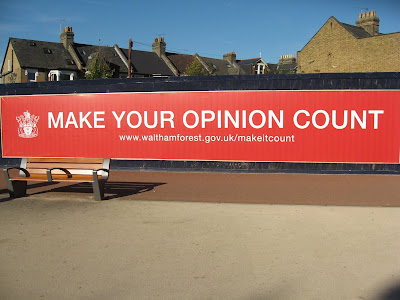 Waltham Forest Council is spending money saying its wants to know what the people of Waltham Forest think about its spending – which apart from being ironic is a bit rich when this sign has gone up on the notorious Arcade site where residents were originally asked to choose one of four possible development plans. When the vote was in the council decided to ignore it and go for one of the other proposals, which subsequently imploded. Still, at least the site was an inspiration to local artists.
Posted by freewheeler at 12:30