How the vehicular cycling environment is getting WORSE 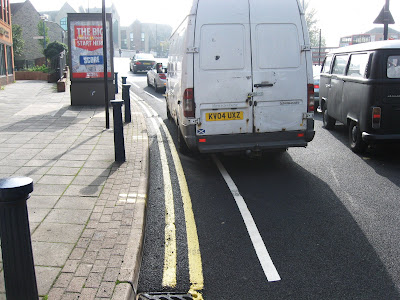 The only thing that could previously be said for this joke cycle lane here on the southbound A112 (which is at most one metre wide) was that it was protected by a continuous white line, which it was illegal for drivers to cross, and it was marked out in pink.

During the recent resurfacing the colour scheme has gone (even though I have a theory, unsupported by anything other than my own experience, that drivers are more likely to keep out of coloured cycle lanes than ones which are plain tarmac) and the continuous white line has been replaced by a broken one, making it legal for drivers to intrude into the cycle lane. So, even at the joke level of vehicular cycling, the cycling environment here has just become worse.

Incidentally, note the cluttered walking environment for pedestrians. Putting an advertising panel in the direct line of pedestrian flow is just the kind of thing you'd expect in crappy, backward, car-centric, walking- and cycling-despising Britain.
Posted by freewheeler at 09:20