Cycling on the pavement 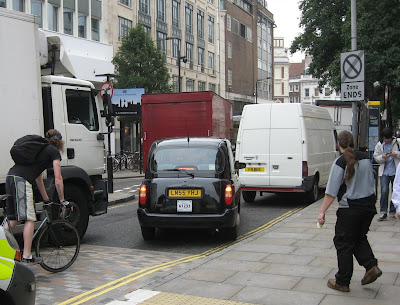 This blog has always been unequivocally opposed to cycling on the pavement – yes, there’s no question that it’s dangerous.

Some police forces, especially those with a tradition to uphold, take a commendably robust attitude to pavement cyclists:

Great grandfather and World War II veteran James Gresty was chased into a bank by two police community support officers after they accused him of cycling on the path outside.

The pair ordered Mr Gresty outside for a ticking-off but when he refused they called for back-up from two officers in a nearby police van.

The police drove over the paved area outside the Halifax in Sale, Greater Manchester, and issued him with a £30 fixed penalty. Widower Mr Gresty, who won several medals during his three-year service with the York and Lancaster Regiment, said yesterday: ‘I was shocked at their attitude. They were carrying on as if I had committed a serious criminal offence.

‘They were being aggressive, rude and heavy-handed all over whether I was cycling on the pavement.

‘But I had got off my bike before I got on the pavement. I’m an 84-year-old man, not a teenage hoodie.’

Recently on Monmouth Street WC2 I witnessed this scene (above). A cyclist riding not on the pavement but in the road, enjoying the cycling-friendly environment of a city in the grip of a ‘cycling revolution’. Sadly, everyone but the cyclist and the pedestrians were committing offences.

Various commercial vehicles were parked obstructively on ‘no waiting at any time’ double yellow lines, and the taxi in front of the cyclist (reg LM55 YHJ, black cab 61233) had just driven over the pavement to get past the lorry.

You never hear much about it (I wonder why?) but driving on the pavement is an offence:

It never gets enforced, and even parents with children who encounter dangerous drivers on the pavement can expect little sympathy or support from their local police or council.

Oh, look who followed the law-abiding cyclist and also drove on the pavement contrary to Section 72 of the highways Act 1835 as amended! 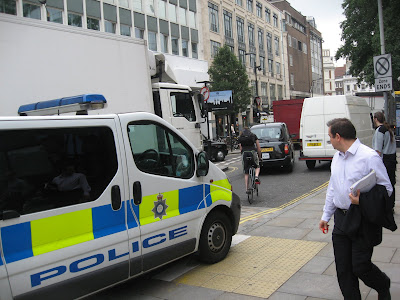 It is however permissible to drive on the pavement when it has been turned into a car park, as here on Forest Road, Walthamstow, as part of the ongoing ‘improvement scheme’. The improvements for both pedestrians and cyclists are obvious. 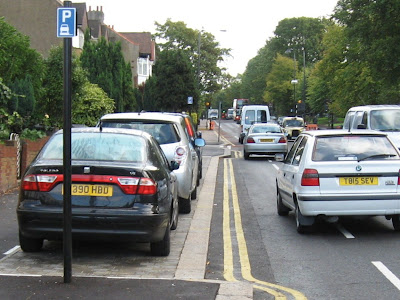 Posted by freewheeler at 09:56