Someone has ‘lost control’ and crashed into this No Entry sign on Queen Elizabeth Road E17 at the entrance to the cycle contraflow path at the junction with Chatham Road. 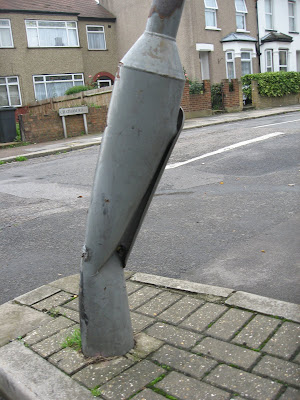 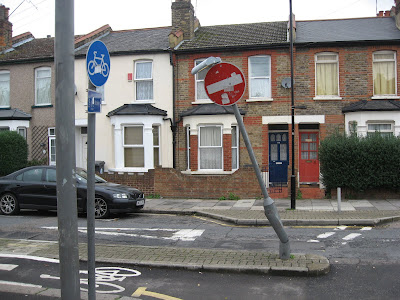 And the mystery of why Woodford New Road was closed last Sunday has been explained:

A CAR ploughed into four men outside a bar and then crashed into a police vehicle when the driver tried to escape.

Police were called to the RS Lounge in Woodford New Road, Walthamstow, shortly after 3am on Sunday (October 3) following reports that several people had been injured after being hit by a car.

The car involved left the scene but collided with a police car in nearby Whipps Cross Road.
A total of six people were taken to hospital.

Three men, aged 21, 22 and 23 were arrested on suspicion of causing grievous bodily harm and dangerous driving.

And just two days later, on Tuesday, the local paper’s traffic news revealed there had been another crash just a short distance away from Sunday’s events:

A406 Southend Road (North Circular Road) Eastbound entry slip road partially blocked, queueing traffic due to accident at A104 Woodford New Road (Waterwork's Corner). At the end of the entry slip road. Causing queues on the main carriageway.
Posted by freewheeler at 11:33