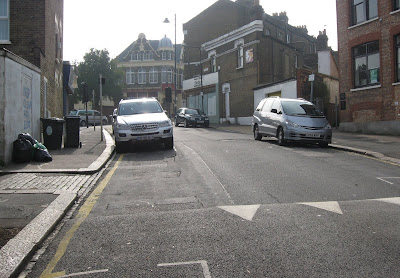 (Above) ‘NO ENTRY’ for cyclists, because parking for 4X4s and Space Wagons is a bigger priority.

The conversion of two-way streets to one-way streets continues apace in the London Borough of Waltham Forest, as elsewhere in London.

The purpose of these conversions is entirely car-centric. As car ownership grows, streets reach saturation point, with vehicles parked along both sides of the road (and with no restrictions on either the size of vehicles or the number you can park). The result for drivers is that two vehicles which meet head-on on such streets cannot always easily get by. So the street is made one-way to ease vehicle flow. But the consequences for cyclists are a more unpleasant and unsafe cycling environment, because on one-way streets there often isn’t the space for a driver to pass safely, which won’t stop some drivers from trying, or from blowing their horns angrily if you ‘take the lane’. There is also a secondary impact for cyclists, because one-way systems can reduce permeability. 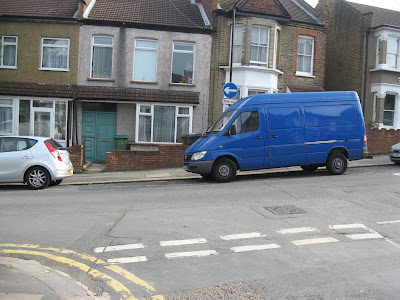 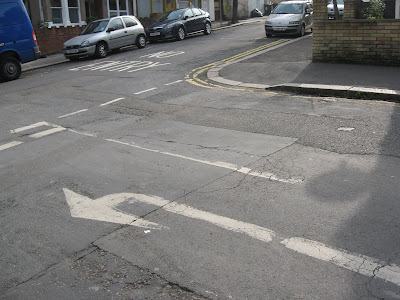 It’s just another symptom of the way in which London is becoming ever more car-centric and even more hostile to cycling. This short section of Jewel Road – ironically wider than streets where cyclists are expected to cycle against the traffic flow, for example Glenthorne Road E17 – is exclusively devoted to parking bays, some for shoppers. (See first photo, above)

Once again, the infrastructure on these two streets is exclusively devoted to car ownership, car parking and motor vehicle flow, and cycling is simply excluded from consideration.

Not that the situation is all that wonderful for pedestrians. In the photo below (which looks back at Jewel Road from Hoe Street) you’ll see two pedestrians having to walk in single file to get past two wheelie bins left out on the pavement. Beyond the wheelie bins lies a heap of bagged rubbish. In the foreground there’s the usual clutter of traffic signs for drivers, as well as one of the absurd yellow grit bins which sit there all the year round, until the snows come and the council then doesn’t bother using them. 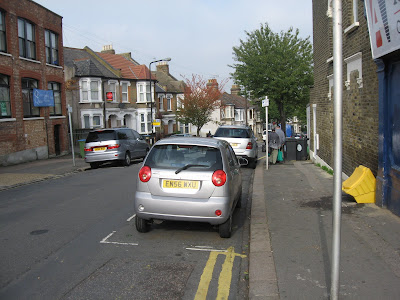