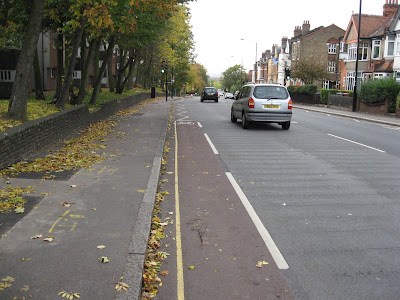 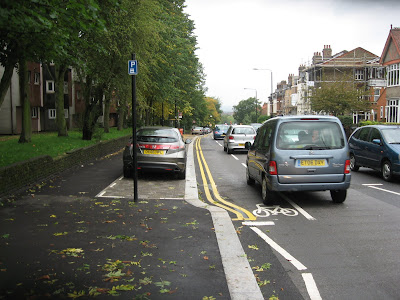 Here is a very good example of the kind of pious, meaningless garbage which keeps cycling campaigners happy:

Carl Pittam, Director of Sustrans in London, said: 'The short distances that make up such a large proportion of journeys in the outer boroughs are perfect for cycling and walking, yet levels of physical activity in outer London are currently lower than inner London.

'That needs to change, which is why we have targeted local authorities in the outer boroughs with this new guidance.

Some of you may have just responded to your local authorities Local Transport Plan (or LTP3). This document will mention the word ‘sustainable’ quite a lot along with the usual airy fairy commitment to reducing carbon and regeneration. However, you will realise as you read further that to a Highways Department, this is best achieved by sorting out traffic bottlenecks to ease congestion on their strategic road network – in essence, not looking at the sheer amount of cars as a problem and using engineering to try and arrive at a solution.

These documents will mention cycling in the same way that Samuel Beckett mentioned Godot. It will use phrases such as ’upgrading infrastructure’ and ‘linking networks in town centres’ in a beautifully ethereal way but won’t actually commit to reducing car space in favour of walking and cycling, which is the solution.

A year ago I warned about a number of so-called ‘improvement schemes’ which the London Borough of Waltham Forest planned to begin in 2010. Each one of these schemes promoted car dependency and car use at the expense of walking and cycling.

Of particular interest was the Forest Road Corridor Scheme, which involved a partnership with Transport for London. This scheme covered a section of the A503 in Walthamstow – a very busy route for buses and lorries, but also a cycling commuter route. This scheme involved a length of carriageway where no parking was permitted and where the road was wide enough to have introduced segregated cycle paths on the Dutch model.

But instead of reallocating street space for cycling, the scheme was all about reallocating it for car parking. It involved creating pavement parking bays to run alongside the cycle lane, and pushing the cycle lane out towards the centre of the carriageway, bringing cyclists closer to overtaking traffic. It is worth pointing out that there was no public pressure for this scheme; it was entirely dreamed up by car-centric transport planners in a faraway office, for whom walking and cycling are of absolutely no interest at all.

The scheme has not yet been finished but here are some photographs of ‘progress’ so far, with photographs taken in October 2009 followed by the same location in October 2010. As you will see, cyclists are now put at risk of ‘dooring’. I think anyone who believes you are going to get mass cycling in conditions like these is utterly delusional. This cycle lane has become objectively more dangerous.

(Below) The same location in October 2009 and one year later. 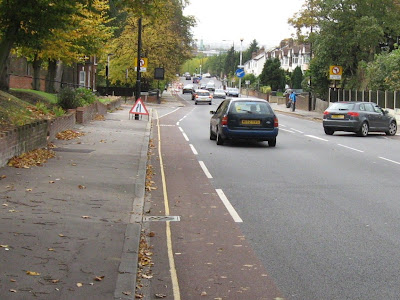 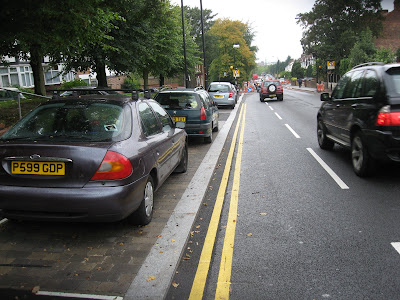 Posted by freewheeler at 09:47