cycling in the age of stupid 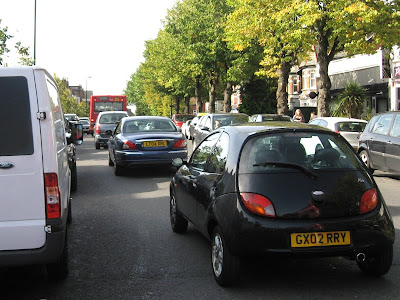 Shopkeepers in Station Road, Chingford, are asking for 15 minutes free parking on the road to help local businesses and encourage more people to come and shop.

Naturally these clowns have never considered the inadequate cycle parking on Station Road, Chingford, because they find it inconceivable that anyone shops by bicycle. But then shopkeepers have always been in thrall to the delusion that their prosperity depends on someone driving as close as possible to their shop. Shopkeepers have always been in the vanguard of opposition to pedestrianisation schemes – until they find they work.

Even in Groningen shopkeepers were unenthusiastic about a car-free centre, until it proved to be a stunning success:

businesses, once in revolt against car restraint, are clamouring for more of it. As Gerrit van Werven, a senior city planner, puts it, 'This is not an environmental programme, it is an economic programme. We are boosting jobs and business. It has been proved that planning for the bicycle is cheaper than planning for the car.' Proving the point, requests now regularly arrive from shopkeepers in streets where 'cyclisation' is not yet in force to ban car traffic on their roads.

Currently shoppers pay £1 an hour for a voucher, which traders say discourages people from coming into the area for a quick shop and drives people to supermarkets with free parking.

[There is not the slightest sign that having to pay discourages shopping on Station Road, where the parking bays are often full. For those who don’t want to pay there is ample parking in the side streets, though admittedly this might involve a driver in having to walk 300-400 yards, which is obviously a very distressing experience for a fossil fuel addict.]

Cllr Michael Lewis said: “People don't like the parking system. And the traffic wardens are very vigilant. They don't want to pay for an hour's parking when they are just popping into one shop.

[Note how ‘people’ in the eyes of a Conservative councillor are indistinguishable from drivers and car dependency. The notion of someone cycling to a local shop is literally inconceivable to the likes of Cllr Lewis.]

“I think if the new scheme goes through it will be very popular with the shoppers and shopkeepers. It gives more flexibility. And if you are going to stay longer that 15 minutes you can still pay for parking. The current system discourages people from shopping in the area.”

If you look at the kind of cars driving around Chingford, you’ll see that their owners are unlikely to be short of one pound to spend on parking. But making driving even cheaper is all part of the insane logic of current British car dependency, which gets worse with every year that passes. Over 80 per cent of all journeys in Britain are made by car and car dependency is ubiquitous.

The vast majority of the British population do not use cycling as a means of transport. Many people simply don't understand it. They don't see cycling as having anything to do with them. Most British people never, ever cycle at all, not even once a year. 79% of women are in that category.

What I find striking about little news stories like this Chingford one is the complete absence of opposing voices. The local Green Party has little or no interest in transport, and none at all in cycling or walking. The Waltham Forest Cycling Campaign, which promotes vehicular cycling, never speaks out about car-centric planning or even the absence of cycle parking. The local Friends of the Earth group seems to have withered and died. The local Transition group appears to have nothing to say.

Documents spew forth all the time urging everyone to walk and cycle more, but they exist in a curious vacuum, unrelated to what is happening on Britain’s streets. Cognitive dissonance rules OK. Global warming? Peak oil? Obesity? Air pollution? These topics exist only as empty words. 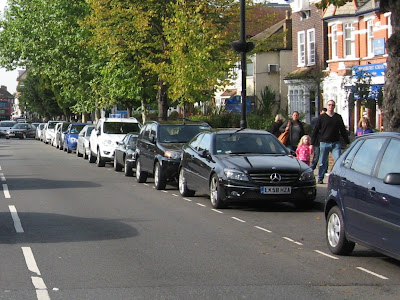 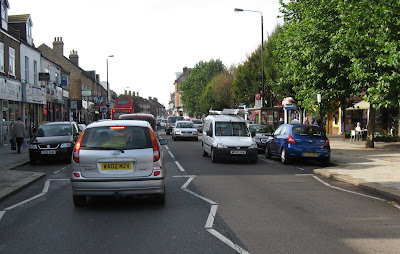 Posted by freewheeler at 11:41