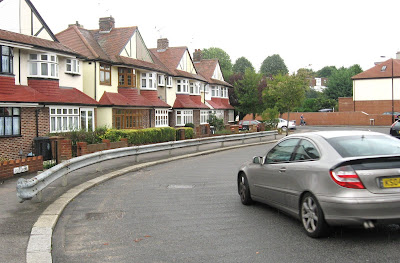 This crash barrier was installed here on an ordinary Walthamstow residential street in a 30 mph zone because so many speeding drivers ‘lost control’ on the sharp bend and crashed into walls, houses, lampposts, etc. Obviously there could be no question of installing speed cameras or making this a 20 mph zone with effective traffic calming, because that would be War On The Motorist.

Cyclists are expected to pedal between the crash barrier and out of control motor vehicles, ensuring additional protection for those valuable garden walls. And clearly there can be no question of building a segregated cycle path, with cyclists behind the barrier. There is plenty of space for it but the result would be that drivers would have to slow down and take extra care when driving past this bend, and that might well add as much as ten seconds to a driver's very important journey time. No, cyclists need to build their confidence and win respect from other road users, and here on Fyfield Road E17 conditions are perfect for developing strong nerves in a challenging environment.

The law, as it stands, effectively stops races being held on public roads in England, Wales and Scotland because an Act of Parliament is needed - at a huge cost - for one to be allowed

The new government was "determined" in its bid to scrap what is effectively a ban on using public highways.
Posted by freewheeler at 08:44