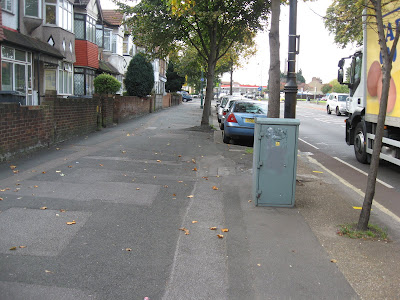 A scene from the London Cycle Network (there’s a lovely blue sign in the distance telling cyclists of their good fortune). Yes, this is the hellish westward section of the A104 (Lea Bridge Road) between the A114 and the B159, where cyclists get a narrow cycle lane and have to share the road with high volumes of traffic, including numerous lorries. And you can see at a glance that there just wouldn’t be room for a segregated cycle path on the Dutch model.

It is a fact that

There are technologically advanced, affluent countries that have managed to make cycling a mainstream mode of transport, a perfectly normal way to get around cities.

Britain isn’t one of them, of course. All British cities are car-centric and hardly anyone has a vision of a better way of planning personal mobility in dense urban environments. London is car-centric to an astonishing degree, and its anti-cycling culture is aided and abetted by a cycling organisation which has no coherent philosophy of how to bring about mass cycling, with local branches which give their support to dangerous and unpleasant cycle lanes, led by a parent organisation whose Trustee and Vice Chair says

Sure, segregation would be great but in London at least there's no room and no money so it's not going to happen.

This kind of ‘realism’ has given London a modal share for cycling of between one and two per cent. Trying to persuade drivers to be nicer to cyclists is a fatuous and doomed policy, just as it is trying to persuade non-cyclists that their fears of cycling are groundless.

Only good, attractive infrastructure will get people cycling. It’s a basic lesson which London has yet to learn, and all over London there are now cycling bloggers showing how crap the existing cycling infrastructure is, and how TfL remains wedded to putting the car first. More on this tomorrow. 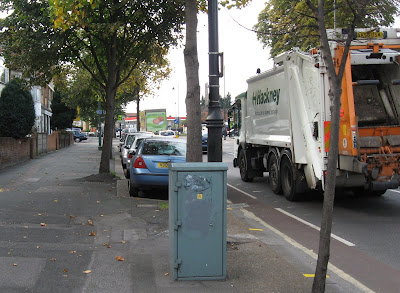 Posted by freewheeler at 09:44