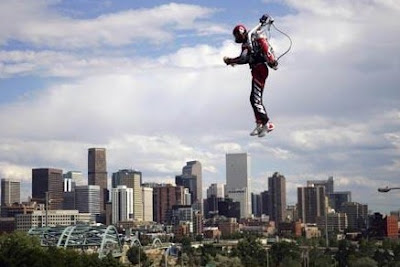 Every year hundreds of doctors and members of their families are injured in road accidents, sometimes even killed. Now a shock new report from Waltham Forest's prestigious Krapp Institute has shown that every single one of these incidents could have been avoided if those involved had been travelling through the air with the aid of jet-packs.

The Krapp Institute is calling for the wearing of jet-packs by doctors’ children to be made compulsory. ‘It is extremely frustrating to know that doctors are putting their children at risk by sending them to school in cars. Roads are no places for children. A small jet-pack can ensure your child will arrive safely in the school yard just minutes after take-off,’ said Chief Executive F.W. Krapp.

Their call was welcomed by other campaigners on the issue. Angela Lee, the chief executive of the Bicycle Helmet Initiative Trust, said: “We are delighted that the College has today joined the British Medical Association (BMA) in giving such a clear endorsement to what we are saying.”

A BMA spokesperson said: "The evidence is there that wearing cycle helmets saves lives and prevent brain damage.

The objection to the bike helmet campaign is that, like the blood-soaked ideology of ‘road safety’, it diverts attention from the need for road danger reduction by transferring responsibility from those causing the injury to those who are injured.

Whether or not you are wearing a helmet is irrelevant if you are cycling on roads where drivers speed, jump red lights, chat on mobile phones, overtake and then turn left right in front of you, emerge from side roads without stopping etc – which is the daily reality of cycling in London. The medical profession has a long history of silence on the epidemic of deaths and injuries on Britain’s roads, in part because the profession is itself dominated by people addicted to car dependency and big flash cars.

Somehow I had previously managed to miss the existence of the Bicycle Helmet Initiative Trust. It appears to be a one-woman charity run from an address in Reading. Its website asserts that

There is overwhelming evidence that cycle helmets are effective and wearing one can help to reduce head injury by up to 88 per cent.

Which is garbage. As we know, wearing a cycle helmet can increase risk because drivers come closer to you than they would if you weren’t wearing one.

The Bicycle Helmet Evangelical Ministry of Truth is keen to spread the gospel:

Children’s wards, GP surgeries and schools are also key areas in the campaign to spread information about the importance of helmets and it is essential leaflets are distributed in all these places.

As more and more children are being encouraged to cycle to school under the Government’s Safer Routes to Schools initiative it is vital that they do so ensuring all safety precautions are taken.

This involves wearing the correct reflective clothing, having cycle training and wearing a helmet.

These sorts of campaign in reality make the roads more dangerous not less, by absolving drivers from responsibility and transferring it to the victim. Not wearing reflective clothing – no wonder that driver ran you down! Crushed by a lorry – well, if you weren’t wearing a helmet it must be your fault you got killed.

Coroners courts now regularly attribute blame to pedestrians and cyclists run down at night who were wearing dark clothing, even when the pedestrian is walking across a zebra crossing.

In August of 2009, President Obama appeared in photos riding with his daughters. Like many parents, the daughters were outfitted with helmets, but dad was not. Many cyclists had the same reaction we did: Oh no!

Whereas my reaction was: I bet he’s not and never has been a cyclist, this is just Obama (who obviously we at the Krapp Institute prefer to the raving mad 19-cars-owning other bloke whose name we’ve already forgotten) doing a typical politician’s Green nice-family-guy PR exercise. And the President of the United States on a bicycle is not remotely at risk of being hit by a driver, because he is cycling on a closed-off road –which makes his family’s use of helmets absurd.

Movingly, the BHSI is troubled by a frightful scene from an American soap opera:

No, not Ed and Carol moving in together, but the scene with them riding a tandem bicycle without helmets and running a stop sign! As a cycling advocate and a rehabilitation professional who has worked with survivors of traumatic head injuries, I was appalled. Head injuries from bicycle accidents are a major problem primarily due to riders not wearing helmets.

No, they’re not. Head injuries from bicycle crashes are a major problem primarily because reckless or inattentive drivers negligently operating a ton of high-speed metal run into cyclists.

Still, you’ll never need to contact the BBC to complain about cyclists not wearing helmets in EastEnders, because in that soap opera nobody cycles, there are no cycle stands, everybody drives, and everybody is always screaming at each other and making threats. Now that’s what I call realism.
Posted by freewheeler at 12:55