Car Free Day is an example of how the world could be if we got rid of our cars, or reduced our car usage and walked or cycled instead. Waltham Forest’s Car Free Day on Sunday 20 September, is to raise awareness of the health and environmental benefits of healthy living and sustainable transport, by leaving the car behind.

Says the local authority which is responsible for the scenes portrayed on this blog.

In reality The London Borough of Waltham Forest promotes increased car ownership, use and dependency at a practical level, while simultaneously generating a froth of Green rhetoric and empty initiatives. ‘Car Free Day’ is every bit as bogus as ‘The Green Fair’.

Apart from its basic neglect of the walking and cycling environment, the Council continues to convert pavements for legalised pavement parking, thereby accommodating those residents who choose to buy larger vehicles such as 4X4s, and who choose to accumulate three or four cars in a single household even though they have no off-street parking space. The Council’s insolence in urging people to take up cycling is spectacular, when two years after I first drew attention to the problem, it has dismally failed to replace even a small number of missing cycle stands.

And this is hilarious:

In Waltham Forest, Car-Free Day takes place on Saturday rather than on Sunday as elsewhere. The borough's Cycling Officer, Gina Harkell explains this is because it has "more impact on cars. Sunday is a quiet day and much easier to close roads on, but is obviously less effective."

Actually, in Waltham Forest ‘Car Free Day’ was switched to Sundays years ago, in order not to inconvenience motorists.

And what does ‘Car Free Day’ do for cycling?

The Waltham Forest Cycling Campaign is thrilled by stuff like this:

Car Free Day in Walthamstow in 2002 and Leytonstone in 2003/4/5 included a demonstration of unusual recumbent bikes and a cycle obstacle course attracting over 100 participants.

Car Free Day in Walthamstow in 2002 was held in Orford Road, at the heart of Walthamstow Village. Seven years later there is still not a single cycle stand anywhere in the neighbourhood – not outside pubs, restaurants, post offices, shops. Nowhere. A perfect example of why wasting tens of thousands of pounds on spurious Green events has become a substitute for encouraging cycling through the development of an attractive infrastructure.

And if you leave your car at home and decide to cycle locally through this Sustrans-approved route at the junction of the A104 and A406, this is what’s on offer (photos taken on Thursday). You begin the route here, at these faded markings. 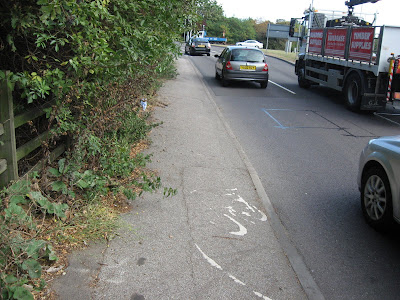 (Below) 'Shared use' Waltham Forest style. Pedestrians on the left, cyclists on the right. This photograph is taken in the exact centre of the route. The Corporation of London is responsible for cutting back this vegetation. It doesn't bother. This obstruction happens every summer, year after year, to the complete indifference of the council. 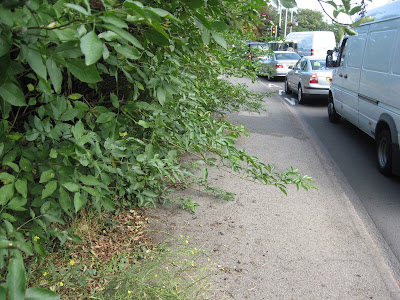 On, into a rat-infested labyrinth of subways, with blind corners and a crumbling surface. A circuitous route designed to avoid slowing down motor vehicles by providing cyclists and pedestrians with a crossing over the A104. Vehicle flow is a much greater priority than those other two transport modes. So pedestrians and cyclists are sent underground. 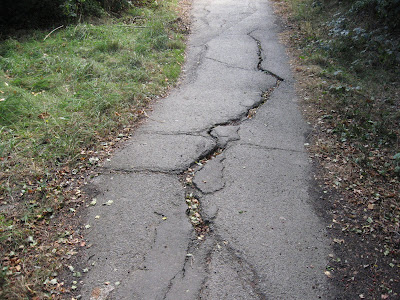 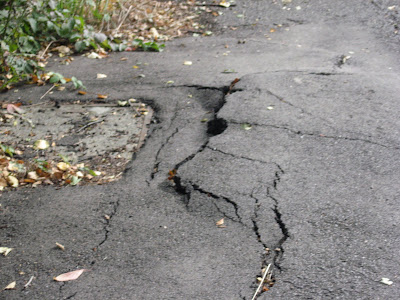 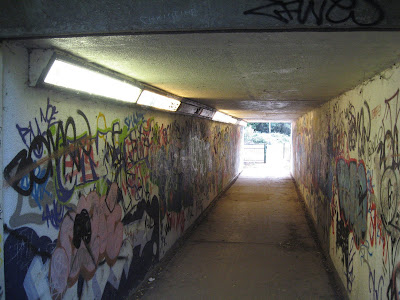 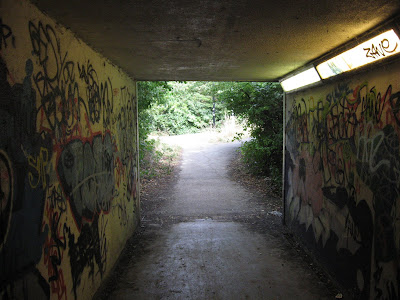