Cyclist killed in Whitechapel is named

POLICE have identified a cyclist killed in a collision with a lorry in Whitechapel on Wednesday. Officers have named 26-year-old Crystal Brown from Hackney who died in the Royal London Hospital after being in collision with the lorry at the junction on Vallance Road and Whitechapel Road around 6.35am on Wednesday morning.

According to another report

Witnesses said the cyclist became trapped between the lorry and railings at the height of morning rush hour.

If that’s true, this simply underlines the inertia of Transport for London and all London boroughs, since major road junctions all over London, including Waltham Forest, have these death-trap railings. There appears to be no campaign to get rid of them.

And this is a classic example of how the ideology of ‘road safety’ becomes a substitute for addressing the root causes of road violence:

A spokesperson for TfL said: “We are doing a number of initiatives to help prevent collisions involving cyclists and lorries. We have produced a five minute short film for HGV drivers and cyclists which was done in July and was distributed by safety officers.

Meanwhile, for the London Cycling Campaign

Campaigns manager Tom Bogdanowicz said, "The number of cyclist deaths involving lorries has grown in recent years. This cannot be allowed to continue: action needs to be taken without delay.”

(Below) A cycle lane with death-trap railings on Willow Walk E17 at the junction with Selborne Road, with a lorry in the Advanced Stop Line for cyclists, and not signalling whether it is turning left or right. 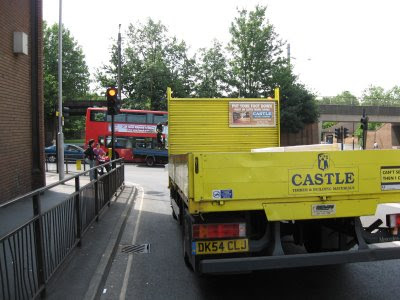