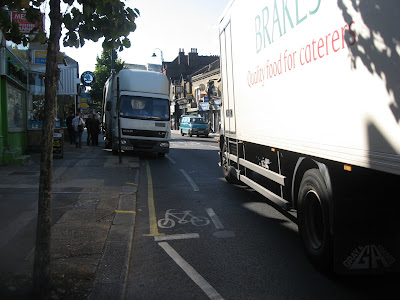 This morning I'm cycling south on the A112. Between Richards Place E17 and Milton Road E17 the cycle lane ahead is obstructed by a heavy goods vehicle. The driver has parked half of it on the pavement and is not in the cab. He is probably delivering to the car showroom he has parked outside. On my right is another lorry. The driver is waiting for oncoming traffic to pass, because there's a green van parked in the cycle lane on the other side of the road, causing a pinch point.

Just beyond the HGV on the pavement is a vehicle delivery truck, also half on the pavement and the rest across the cycle lane. Both drivers are committing civil and criminal offences, but I think they park like this because enforcement is rare or non-existent.

(Below) Two hundred metres further on I come to this. That huge tow lorry is not in the cycle lane, although the white van in front of it is. The cycle lane is of irregular width and at the point beside the tow truck it narrows to somewhere between half a metre and three-quarters of a metre in width.

A safe and attractive environment for cycling? I think not. 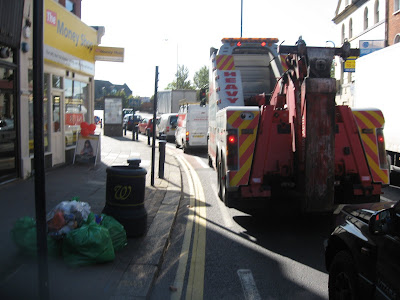 Posted by freewheeler at 12:28