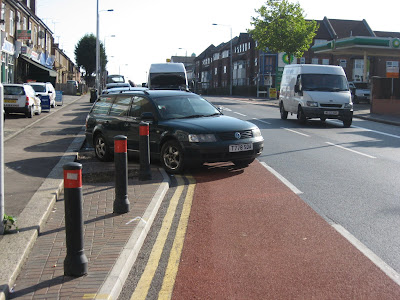 This photograph sums it all up, does it not? Cycle facilities are paltry and inadequate but even where they do exist there's often a driver prepared to obstruct them rather than put himself/herself to any inconvenience by parking lawfully and walking. This driver was too lazy to walk a few yards and chose to park like this. Forest Road E17 (aka the A503) by the junction with Luton Road - a major route in and out of London.

Moments earlier I'd photographed this example (below) of double-parking in the cycle lane. White van man was still there ten minutes later. Double-parking occurs all day long in the cycle lane by these popular free parking bays. In the background is Walthamstow police station, but as we know the police are not interested in anti-social behaviour or crime if the offender is a motorist. 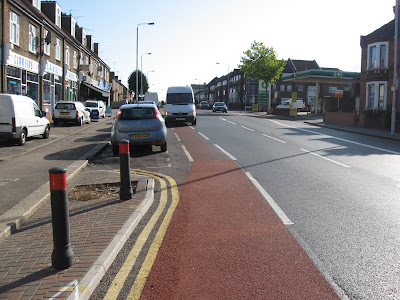 Ironically, the scene shown above features the same site shown below. A location which as you can see has since been modified. In reality this fabulous scheme whereby cyclists were invited to undertake parked cars on the passenger side never worked out and was duly abandoned. The Council continues to boast about this now non-existent facility, handing out literature which is now years out of date. Funnily enough, it was one of those 'special facilities' where the Council has form. Needless to say, the row of shops on the left doesn't have a single cycle stand. 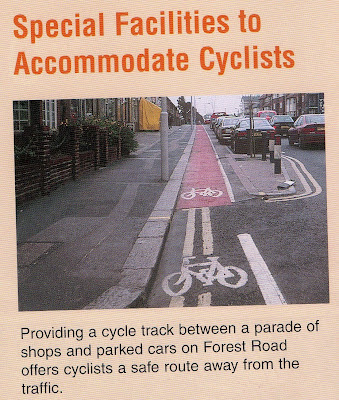 Posted by freewheeler at 13:36