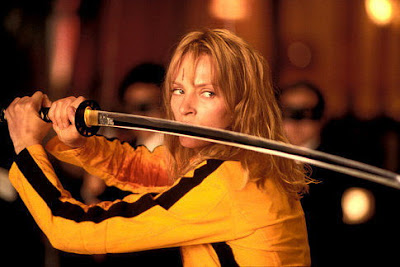 Stationary in the road one hundred metres ahead of me. Still stationary as I reach the van. As I cycle past, the van suddenly accelerates without warning. I am trapped in the middle of the road with a speeding van on my inside. I scream at the driver to stop, and he does. ‘You were parked, and you didn’t look in your mirror!’ I shout.

‘I wasn’t parked!’ he shouts back.

Well whatever he was doing – looking at a map perhaps – he wasn’t considering the possibility as he drove off that a cyclist might be overtaking him.

Nor was he in the slightest bit repentant or apologetic.

Pointless having an argument with a driver like that, so I cycle on.

As he overtakes me, he screams at me.

I am left shaking from the original shock of being placed in a position of danger, and now I’m furious that the driver didn’t even say sorry, but chose to verbally abuse me, even though I didn’t abuse him but was scrupulously reasonable and polite.

Is it a coincidence that my favourite film is Kill Bill? A revenge film, where lots of bad people are terminated.

Some of us cyclists have a rich fantasy life, you know.

One fantasy involves me giving up cycling and blogging and instead using a car to get around the neighbourhood. And, hey, sometimes dreams come true!
Posted by freewheeler at 12:57