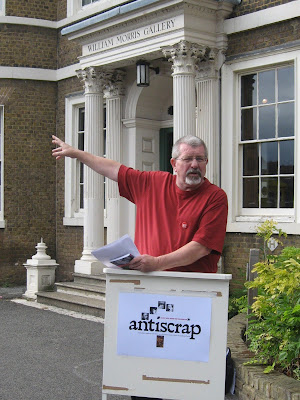 Wheeling away down the road of life,
I and my Daisy Bell.
When the night’s dark, we can both despise
Policemen and lamps as well.
There are bright lights in the dazzling eyes
Of beautiful Daisy Bell.

This song is a shocking reminder that cyclists have always been a subversive force in society, ignoring traffic law and despising policemen. This is probably not the bit used by Walt Disney in the film where Donald Duck courts Daisy Duck on a tandem bicycle and sings part of the song.

Apparently the song was inspired by Frances Evelyn "Daisy" Greville, Countess of Warwick, who, surprisingly, was a high society socialist, who spent a lot of time hanging out in Walthamstow with working class radicals. One such location was The William Morris Hall, shown in yesterday's post. This was built by workers who contributed by buying bricks, and then helping to construct it, allowing local radicals to have a meeting place, not just for politics but also for a wide range of artistic activities. In place of Sunday school and theology, the children of working class activists had a secular alternative. Sadly, the 'Socialist Ten Commandments' have vanished from the hall, having naturally been removed when the hall eventually fell into the hands of the local Labour council, who sold it on to a local sweatshop business. Since then it has, fortunately, been taken over as a children's centre.

I learnt all this by going on last Sunday's 'Radical Walk', led by local activist and campaigner Roger Huddle (shown above), who the other active Walthamstow blogger has dubbed inspirational. And he is, too - bubbling over with enthusiasm and local knowledge, and marching us off on a three-hour jaunt around the neighbourhood, stopping outside local sites where significant local figures once lived or assembled. 'There should be a plaque here!' he kept saying. But as we know, the local council is dominated by philistines who have no interest in the area's extraordinarily rich cultural history. This crap Council is only inspired by the proposals of property developers. Roger Huddle is very involved with local campaign group antiscrap and I hope one day he'll publish his walk talks.

He also talked about Walthamstow's radical cycling history. More about that tomorrow... 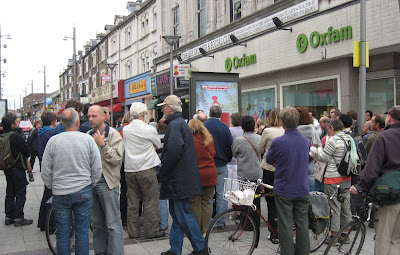 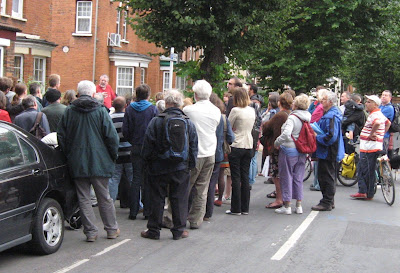 Posted by freewheeler at 15:40