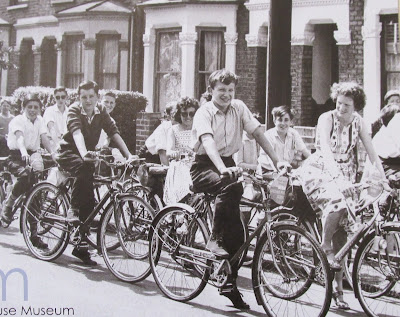 Child cyclists in Waltham Forest. The location and year are unknown but this is easily recognised as a typical local street of terraced housing, and my guess is that the photo was taken some fifty or sixty years ago. The above photograph is reproduced from a poster at the Vestry House Museum, Walthamstow (which is well worth a visit – please note that a single bike stand is available for visitors coming by Waltham Forest’s most unpopular means of personal mobility).

Everybody knows that cycling in Waltham Forest is crap. A modal share of less than one per cent indicates that very few adults wish to cycle on roads crammed with lorries, buses, vans and cars. The conditions shown in the old photograph above no longer exist. Every street in Waltham Forest is now car-sodden, every spare inch is devoted to parking bays - even though the borough still has high levels of non-car-owning households. Child cyclists dressed like this would also nowadays attract condemnation from so-called "road safety" experts, police officers and others keen to stress the need for cyclists to wear high visibility apparel and helmets.

Very few parents in Waltham Forest want to see their children cycling to school on roads which have cycling infrastructure like this. 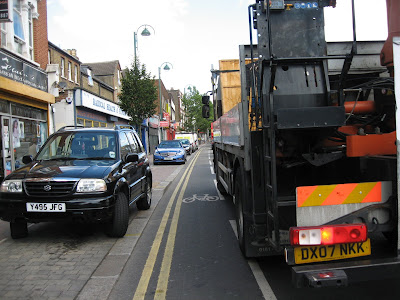 This is what it’s like to cycle on High Road Leytonstone a street which Sustrans was once happy to identify as “cycling friendly”. (When I read Sustrans’s rose-tinted view of cycle routes in Waltham Forest – once available on-line but since deleted - I realised this was yet another distinguished UK cycling organisation which seemed never to have encountered the concept of subjective safety.)

Where very few children cycle you know that cycling is perceived by parents as unsafe. A lot of orthodox UK cycle campaigning is dedicated to the proposition that parents are wrong. They must be taught that statistically cycling in Britain is safe, and that all that is required of children to cope with traffic is a spot of cycle training. This approach is behaviourist rather than infrastructural.

The corporate media is in a perpetual moral panic about cyclists, including children. Here’s a recent example. Even if the story’s thrust is true, all it signifies is that child cyclists have nowhere else to go.

Which brings me to Hackney and York, places which in my opinion have a preposterously exaggerated reputation as places where everything is hunky dory for cycling.

I would argue that in reality both Hackney and York are failed locations for cycling, though you’d never know it from cycling campaigners or cycling commentary. The reasons why cycling is going absolutely nowhere in Hackney and York is perfectly simple: all that’s on offer is vehicular cycling. The result is that modal share isn't growing in the way it should be growing. In York, cycling has been stagnating since the 1990s. In Hackney modal share seems stuck at below ten per cent. In both places the modal share seems dictated by unique local factors rather than by cycling policy.

If John Franklin is the guru of British cycle campaigners, the LCC’s Hackney branch surely comprises Mr Franklin’s cadre. I don't think I am misrepresenting it when I say that the biggest local campaign group in Britain is firmly committed to vehicular cycling (via UK-style permeability and speed reduction) and unenthusiastic about segregated cycle tracks. The historical overlap between this local LCC branch and the London Cycling Campaign’s personnel is quite illuminating, and to my mind helps to explain why the Love London. Go Dutch campaign has been significantly diluted.

Cycling campaigners are very fond of statistics. Here’s a killer stat that to my mind gives the lie to the claims made for cycling in Hackney. Data from Hackney Schools' School Travel Plans (STPs) shows that 33% of pupils from primary and secondary schools would like to cycle to school but only 3% do.

Faced with this parlous situation, what is Hackney Council’s response? The usual crap:

• Ensure there is secure cycle parking for pupils and staff at your school and publicise this well, for example in newsletters and during assemblies
• Organise cycle training for pupils to improve their skills and increase their confidence
• Encourage staff to cycle. Ask members of staff who currently cycle to work to become 'cycling' champions' to promote cycling to other members of staff
• Hold a cycling event, for example a 'bikers breakfast' or 'bling your bike' activity perhaps during Bike Week in June
• Reward children who cycle to school, for example a prize draw for children who cycle at least once a week, to win fun cycling related prizes
• Offer incentives to staff to switch from driving to work to cycling instead - e.g. prize draw or sustainable travel bonus
• Inform staff about free cycle training available from Hackney Council

In other words, do almost anything except build the kind of safe, convenient cycling infrastructure which encourages huge numbers of Dutch children to cycle to school.

And to add to the mix, here’s another crumb that an internet search exposes: Safety [is] the number one issue in deterring cargo bike purchase in Hackney

Let’s move on to York, where over a quarter of primary school children would like to cycle to school when only five percent are currently doing so

The Cycling City York project (which cost £7 million and seems to have resulted in not one centimetre of Dutch-style cycling infrastructure being built) was claimed to be a great success.

It became clear early-on that one of the three main measurable targets – to double the number of children cycling to school – was an unrealistic goal, although one which would continue to be striven for.

This goal is only “unrealistic” if you approach it with vehicular cycling solutions. In the case of York, it’s the same tired old crap:

You can blather all you want to about cycling being statistically safe, but few parents want to send their children to school on roads like this (which happens to be Gillygate, in central York - although it could be almost any urban street in Britain). 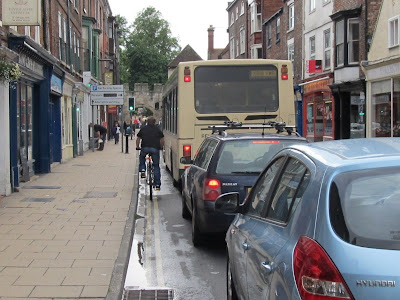 The language of choice, in which many people who say they are promoting cycling continue to engage, is poisoning cycling’s future. We must move away from it, because it is a lie – when it comes to children’s cycling, we have exterminated agency. Until we recognise and rectify this, we will have no democratic culture of everyday cycling, let alone children’s cycling, in Britain.
Posted by Freewheeler at 07:16