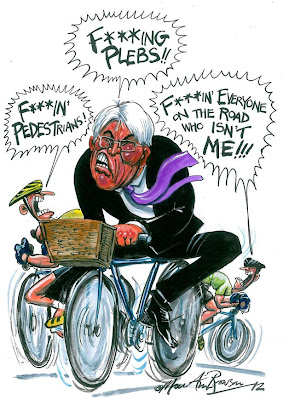 Here is the formula and here is the latest example (complete with traditional “a cyclist almost killed…” personal anecdote):

THERE is an explanation for Andrew Mitchell’s sneering arrogance towards the police that has been overlooked – the creep rides a bicycle.

After the summer when Bradley Wiggins and Victoria Pendleton ascended to superstardom, cycling has never been more fashionable.

And cyclists have never had such preening contempt for everyone else.

Meanwhile here is the latest scandalous sentence imposed on a van driver who slammed into the back of a cyclist and killed him (the scandal lies in the perfunctory and insulting one year driving ban). It remains unclear if the police investigated the possibility that the driver was using a handheld mobile phone at the time of the collision.

And here is the latest physical assault on a cyclist.

By the way, after mysteriously vanishing, the Cycling Lawyer is back. His comments on the Andrew Mitchell affair are worth reading

Journalism plays a role in shaping how we see the world around us, and at a national level the carnage on the roads goes more or less unreported and unnoticed. It was noticeable that apart from the Daily Mail (which is actually very good on human interest stories) most of the British national media simply ignored the extraordinary case of Joao Correia-Lopes.
Posted by Freewheeler at 13:11