I’ve noticed that among the complaints levelled against that anti-social category defined as "cyclists" by the bulging-eyed foam-flecked cyclophobes who infest the comments columns of local newspapers, apart from jumping red lights, not wearing helmets, not wearing “responsible clothing”, repeatedly almost killing pensioners and pedestrians in general, self-righteousness and road tax dodging, is the sin of weaving.

Cyclists weave in and out of traffic. They do not act in a responsible and structured way, like all those motorists who form an orderly queue. Cyclists are anarchic weavers and weaving is bad.

The description of cyclists as weavers is not in itself inaccurate. But I object to the attachment of a value judgement. I’m a weaver myself. Weaving is simply an inevitable consequence of having to cycle in an environment saturated with motor vehicles.

I’ve never understood the argument of the vehicular cycling brigade that Dutch infrastructure would slow us all down and it’s much better to share the road. I’m not a slow cyclist and I find that cycling in London I’m repeatedly slowed down by drivers. They are always stopping or turning round or clogging up junctions or just driving in long lines at 10 mph. That's when the streets aren't already clogged up by on-street car parking. The thing is, I need to get past them. I have no interest at all in cycling at 5 mph or in waiting behind a vehicle belching toxic blue fumes. I bike therefore I weave.

Here are two weavers in York. Female, both in their twenties by the look of it. They have emerged from either Bootham or Gillygate and are heading into the city centre. What happens here, by Bootham Bar (not a place to sip cocktails but an ancient city gate), is that they catch up with stationary motor vehicles on St Leonard’s Place. They overtake a stationary bus and a blue car and are then faced by a typical York zig-zag pedestrian cattle pen (which is ludicrously small for the vast crowds which pour across here in the summer and which obliges pedestrians to cross the road in two separate light phases – note also the pedestrian who is ignoring it altogether because it doesn’t meet the pedestrian desire line). So they weave through the gap between the blue car and the car in front to join the crap CTC-approved cycle lane. 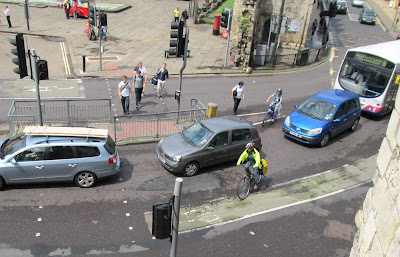 Almost at once the crap CTC-approved cycle lane fizzles out to make way for that far more important feature of any city centre, parking for taxis. But as the first cyclist moves between the parked taxi and the car stationary in a traffic jam she is faced by a woman about to hurl open the front passenger door of the next car in the traffic jam. 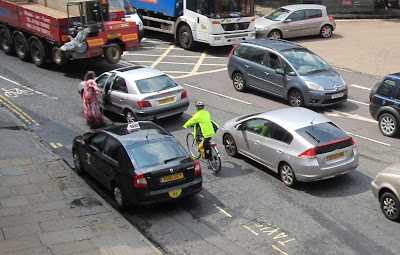 I am pleased to report that she managed to avoid the swung-open door and rejoined the next scrap of crap cycle lane. By weaving.

Weaving is a survival technique and a way of maximising the advantage of cycling. Because if a bicycle is a vehicle and must behave like a vehicle, then there isn’t much point in cycling in a British city.

Modal share in any British town or city depends on how many people you can persuade to weave. As weaving requires great confidence and courage it is not for the hesitant, the nervous, or anyone who thinks cycling should be relaxing and easy. Both the weavers shown here are dressed in traditional weaving costume - one has high viz gear and both are wearing helmets.

And now here is a song about vehicular cycling and “churn”.

Posted by Freewheeler at 09:53