I cycled to the Olympic Park to pick up some tickets for the Paralympics.

I thought I’d try the Eton Manor box office as the queues there would be shorter than at Stratford.

Eton Manor is the Olympic Park entrance which notoriously was supposed to attract 40,000 pedestrians a day.

It wasn’t easy to find (the official Olympic site map shows the box office on the south side of Eastway when in fact it’s on the north). There are naturally no signs designed to help cyclists find it. And if you are walking from Leyton tube I think you'd end up wishing you'd gone to Stratford instead.

After going too far I turned back and eventually located the visitor entrance.

The ticket office was at the far side of this vast expanse of empty space (below). It has a scrap of blue on the roof and is just visible to the right of the pole in the foreground.

The security guards emphasized that this is a no cycling area and I would have to walk. I suppose this is a health and safety issue. If I’d cycled I could so easily have collided with something. 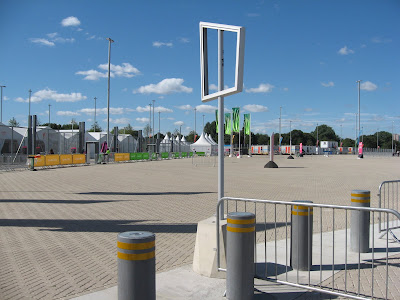 The ticket office turned out to be entirely deserted, with no queue at all. Funny that. Why, it’s almost as if no one was bothering to walk or cycle to the Olympic Park!

I collected my tickets and then walked back. By now a solitary pedestrian had appeared and obviously I would have posed a severe hazard if I'd cycled past her in this narrow space. 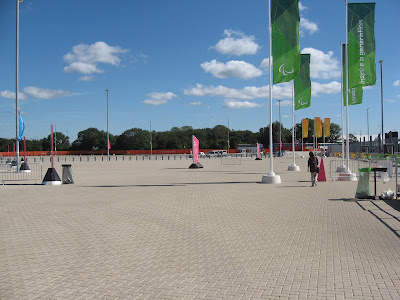 After my invigorating stroll I finally regained the cycling-friendly Eastway.  I then pedalled off northward in a spirit of self-punishment to see if the two Olympic Greenways marked in red on the map below had been built across the Wanstead Flats sections which are marked in green. 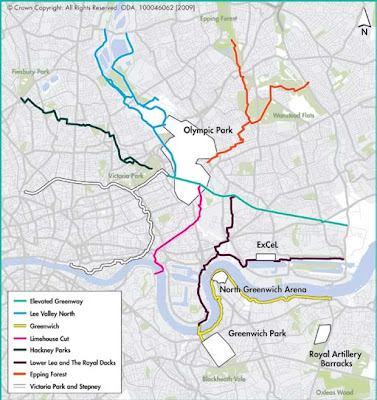 Add all this to the inventory of failure.
Posted by Freewheeler at 14:30