PACTS is an obstacle to safe, mass cycling in Britain

PACTS is one of those ubiquitous outfits which regularly issue press releases and which have a high media profile where "road safety" is concerned. Its conclusions are regularly cited in connection with matters connected to cycling.

Here’s a recent example in the form of a response to a report on European cycling casualties by something called the European Transport Safety Council (ETSC).

Executive director of the Parliamentary Advisory Committee on Transport Safety (PACTS), Robert Gifford, said: ‘I was very worried by this data. There are always questions over the reliability of the data, but this evidence does suggest the safety in numbers theory is true and without doubt the political parties have to get more people cycling, more safely.’

Mr Gifford said ‘smart councils will be looking in great detail at which cyclists are being killed, where and how, and using social marketing to target a [safety] message towards them’.

In other words, the usual victim-blaming plus a "publicity and education" strategy which is proven to be inefffective combined with the "safety in numbers" delusion.

So what exactly is PACTS?

It brings together safety professionals and legislators to identify research-based solutions to transport safety problems having regard to cost, effectiveness, achievability and acceptability.

Ah, pragmatism about “cost” and “achievability” and “acceptability”. The kind of crap which is inevitably used to obstruct the construction of safe, convenient cycling infrastructure. Because it’s too expensive and it isn’t achievable because the roads are too narrow and anyway it would never be acceptable so we won’t ask for it. Timeless crap like that.

And who are the “safety professionals” who get to discuss issues relating to cycling? They include

and perhaps most impressively of all

But leaving aside PACTS's flabby, rubbery job description and its membership assemblage of peculiarities, let’s look at where the obstacle to safe, mass cycling resides.

PACTS roots for lower speeds and more cycle lanes as the way forward for safe cycling:

A literature review commissioned by the Department for Transport (DfT) and written by TRL found that the greatest benefits of all interventions to increase cycle safety comes from reducing motor vehicle speeds.

The example of the Netherlands shows how false this assumption is. Speed reduction is only one part of the package there. The greatest safety intervention is the physical separation of cyclists from motor vehicles. Segregating cyclists from vehicles is how you start to make cycling attractive and everything follows from that. The problem with the orthodox British approach to cycling safety is that it prioritises vehicular cycling, which by now has a very long record of failure. By focusing simply on speed reduction you may reduce casualty figures in particular areas but those areas don't then become attractive for mass cycling and cycling overall in Britain remains subjectively and objectively dangerous and hence unattractive as a means of mass transport. The problem with speed reduction strategies is that in isolation they do nothing at all to challenge the hegemony of the car on every street or the blunt reality of hegemonic motor vehicle infrastructure. All the signs are that far from there being "safety in numbers", the more people you get cycling in Britain, the more dead and injured cyclists you get. It's about exposure to risk, and that exposure is far greater in Britain than in the Netherlands because fundamentally, cycling in the motorised environment is dangerous.

What PACTS, the DfT and TRL are against (as are large swathes of the UK cycle campaign establishment) is segregated cycling infrastructure. According to PACTS

Kerbed, segregated cycle lanes are not wide-spread in the UK, and the TRL literature review found no evidence in Europe regarding the safety performance of kerbed cycle lanes.

For a start there’s a problem here with terminology and definition. A route exclusively for cyclists and physically segregated from motor vehicle traffic should be described as a cycle track or a cycle path not a cycle lane. Describing cycle paths as “kerbed” is open to misunderstanding, since some European countries do segregate cyclists from motor vehicles by nothing more than a kerb – you can see this in France and Denmark – but Dutch separation involves far more than just a strip of kerbing.

In any case, to talk about “Kerbed, segregated cycle lanes” in the UK as if they bore any kind of resemblance to European practice is absurd. Even French or Danish infrastructure is infinitely better than the UK equivalent, which will inevitably be short in length, incoherent and ineffective in design, and almost always fragmentary and not forming part of any coherent route network.

As for the breathtaking statement that “the TRL literature review found no evidence in Europe regarding the safety performance of kerbed cycle lanes”. Presumably the literature review began and ended here and went no further than the expertise of the UK’s number one cycle safety expert. Or maybe nobody at TRL reads Dutch and is unaware that literature reviews conducted entirely in English can raise little difficulties concerning translation. And obviously it would be out of the question for anyone to actually visit a remote faraway place like the Netherlands. Or even to glance at all the information contained here.

TRL is supposed to represent scientific expertise and objectivity yet when it comes to cycling it seems to embody ignorance and amateurism on a colossal scale. When it comes to European cycling infrastructure and safety even a humble blogger can do better.

But if continental cycling infrastructure has nothing to teach us about safety, what are we left with? According to PACTS

In Britain “many people…have a desire for more cycle lanes”.

Keeping bicycle riding safe should be encouraged wherever possible by the implementation of well planned cycle provisions, such as cycle lanes. Cycle lanes keep bicycles out of the way of the traffic zone and a comprehensive city system can help put bikers' and pedestrians' minds at ease.

That’s right. Relax on the joined-up London Cycle Network. Here’s the cycle lane on the southbound A112 in the London Borough of Waltham Forest approaching the Bakers Arms junction. This would put anyone’s mind at ease, would it not? 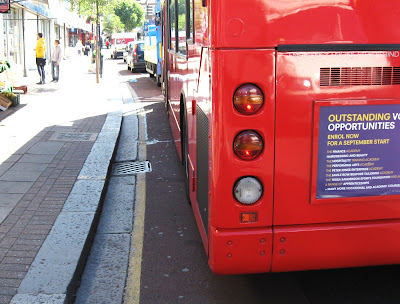 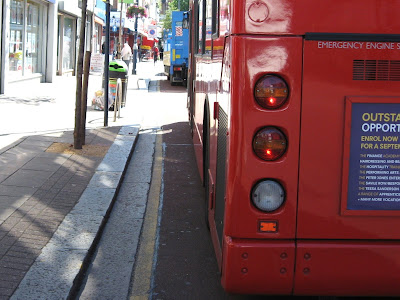 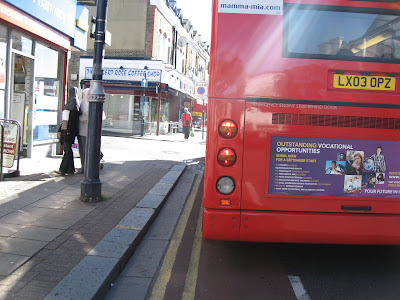 Posted by Freewheeler at 11:17