Leyton Links (3): how to suppress cycling 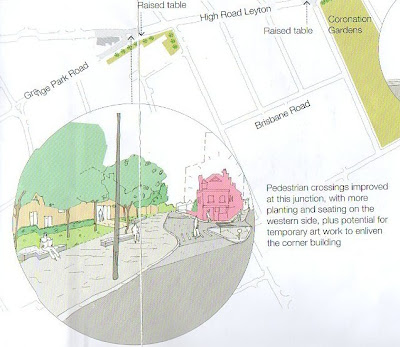 The plan of this Olympic-funded "improvement" shows the point at which High Road Leyton runs into Grange Park Road.

It promises “Pedestrian crossings improved at this junction, with more planting and seating on the western side, plus potential for temporary art work to enliven the corner building.”

It is not clear what form the pedestrian improvements took, although I suspect it might mean that the footway was built out on the west side to make a shorter crossing.

As for the other projected improvements. Some planting has been carried out by the fence, though the depth is much narrower than shown in the plan. The two benches were not installed. There was no temporary art work because the building on the corner was demolished and replaced by a block of apartments.

Oddest of all, the plan fails to acknowledge that this location is a bus stop. 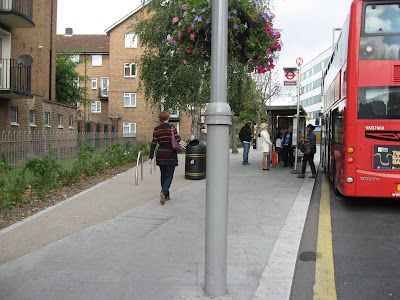 Six new bike stands have been installed. This is classic tokenism and utterly bizarre. I have never seen a bike locked up here, nor can I imagine who would want to park their bike here. It’s a bleak location which is not close to any shops or other obvious source of interest. It’s also perverse when other sites in the borough are crying out for decent bike stand provision (by Sainsbury’s in Walthamstow High Street, for example, which has just two stands, and a further three nearby on Willow Walk – utterly inadequate provision for a very busy area). 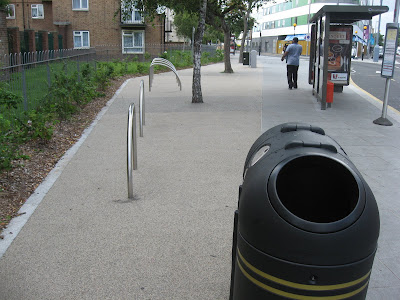 From a cycling point of view the on-road provision is atrocious. A crap cycle lane fizzles out at the bus stop. 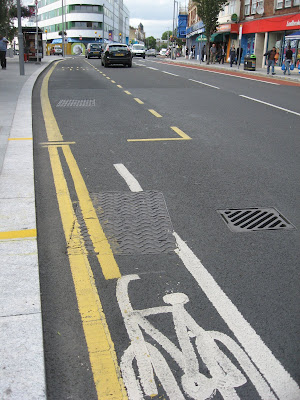 However, by far the worst aspect of the design is that the footway build-out creates a lethal pinch point which forces cyclists into conflict with motor vehicles. These were the three vehicles which came along, one after the other, while I stood and took photographs. You can see the problem. Needless to say, this pinch point is completely unnecessary. It simply underlines how no one involved in transport planning in Waltham Forest has a clue about how to design for cycling, or cares about the borough’s dismal cycling rate. 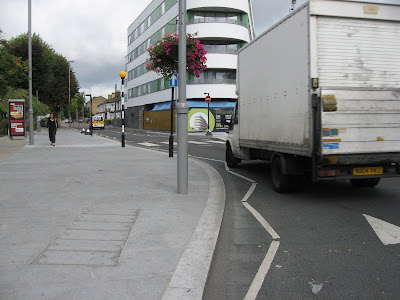 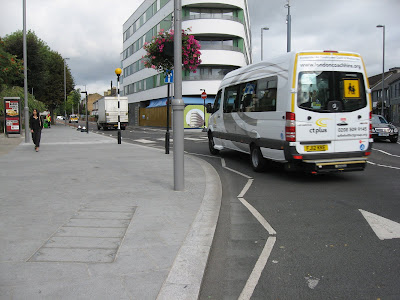 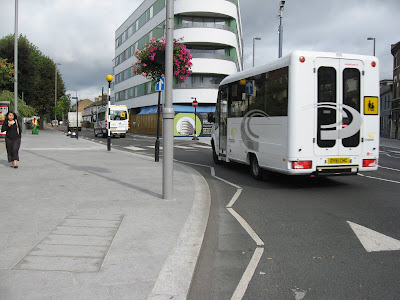 I should add that Grange Park Road forms the first part of a triangular one-way gyratory which is deeply hostile to cycling. This shows the High Road from a point further north, looking towards the junction under discussion. The scope for Dutch-style segregated cycling infrastructure on this "A" road is blatantly obvious. However, no one is asking for it. And the crap council even allows parking in the bus lane between 10 am and 4 pm. 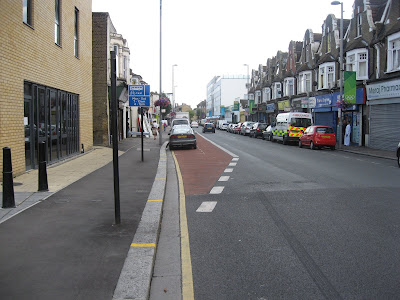