Exhibition Road revisited (with a footnote on Richard Lewis) 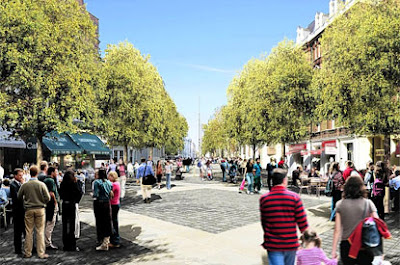 (Above) Exhibition Road: the planner’s fantasy
(Below) The car-centric reality.

The pedestrians in the foreground are waiting to cross the road after their first attempt failed when drivers declined to give way. 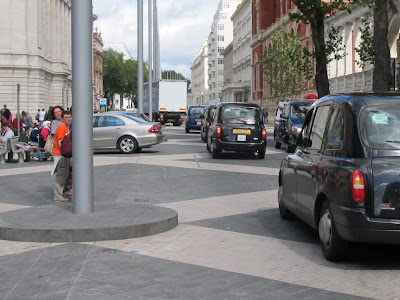 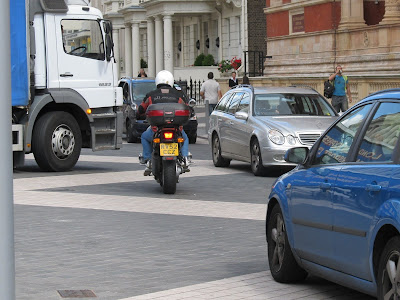 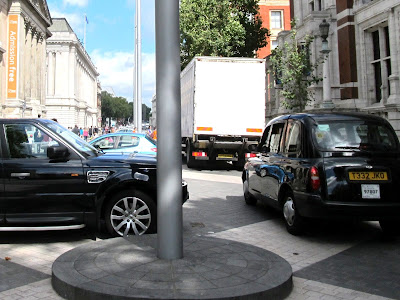 (Below) Removing the carriageway markings for this signalled pedestrian crossing on Exhibition Road results in it being obstructed by a luxury car and a black cab when the light is green for pedestrians. 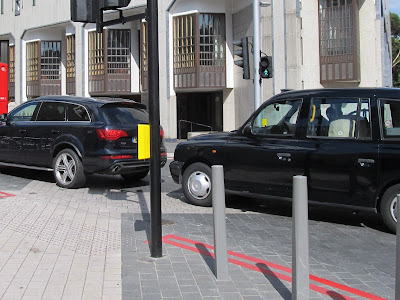 Exhibition Road has been well-blogged about and I don’t really have anything of substance to add to what hasn’t already been said before.

Shared space does precisely nothing to challenge the hegemony of the car and can actually make things worse for cycling.

Specifically, the ludicrous and exaggerated claims made about Exhibition Road have been debunked here and here.

However, one commentator complained Can’t we give it a bit more than a week to declare it a huge failure?

This blog is happy to oblige.

Many months later shared space on Exhibition Road seems to me to be a huge failure.

Exhibition Road remains a street where cycling and walking are subordinated to the hegemony of the motor vehicle. For cyclists there is no safe, segregated cycle path but simply vehicular cycling among high volumes of traffic. For pedestrians there is nothing more on offer than the old footways and some space between the western footway and lines of parked cars.

Bear in mind that this car-centric farce on a single street cost a staggering total of £29 million.

The paving is attractive but that doesn’t compensate for the comprehensive failure of this street. It doesn’t even have adequate cycle parking. Even though it is at the very heart of three major London museums (the Natural History Museum, the Science Museum and the V & A), and even though tens of thousands of visitors come this way on foot, this is not a civilised space.

The solution is blindingly obvious. The whole of Exhibition Road should be pedestrianised (with cycling permitted). And motor traffic on the A4 should be put in a tunnel.

(Below)  Cyclists crossing the A4 from Exhibition Road don’t strike me as looking particularly relaxed. 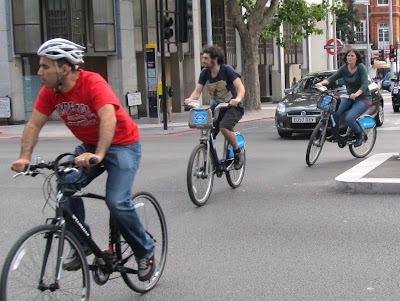 (Below) As a cyclist pulls out to avoid pedestrians still crossing after the lights have changed, the bus driver behind applies the brakes. 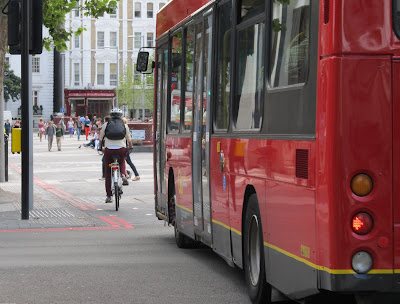 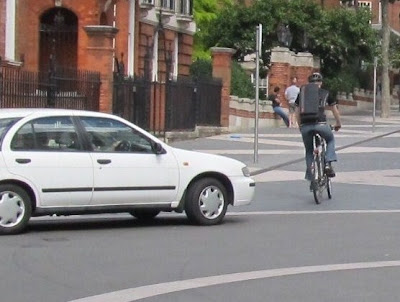 Plenty of parking for cars on Exhibition Road but very few cycle stands. 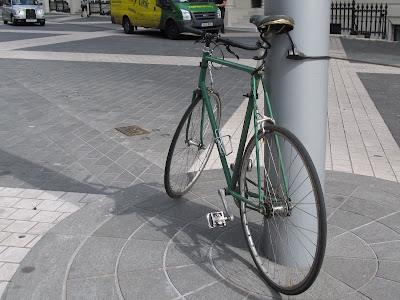 A taxi drives on what was previously the footway in order to deliver passengers to a museum entrance. 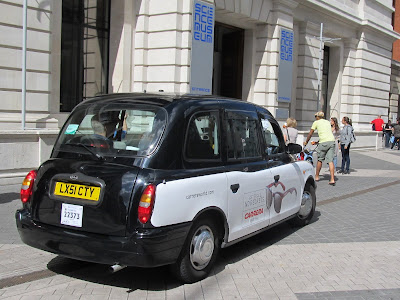 Pedestrian flow is subordinated to rat-running cars emerging from side streets. 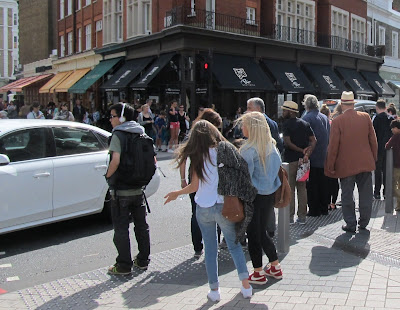 There is one road where the claims made for Exhibition Road come true. But this isn’t Exhibition Road but an adjacent street, Thurloe Street. The reason for pedestrians having the confidence to take over the carriageway is perfectly simple. One end is blocked off to motor vehicles, preventing it becoming a rat run. 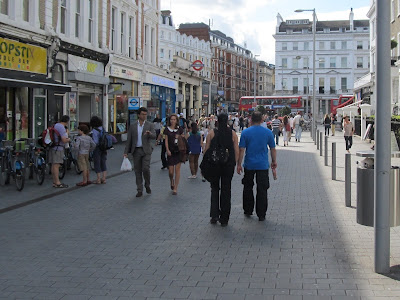 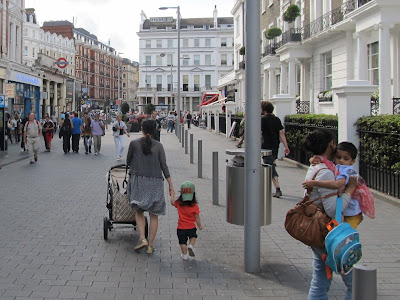 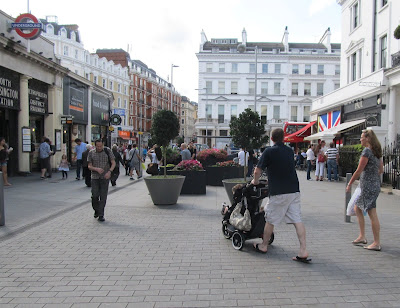 Richard Lewis is a “London Cycling Campaign technical expert” as well as “a principal policy planner for the London Borough of Newham” and “a long-time campaigner for sustainable transport, cycling and better cities for people.”

Mr Lewis illuminatingly articulates his own point of view in the comments here.

Long before all this he attracted just a touch of sarcasm (lawks!) here.

Trawling through the interweb archives I was somehow not at all surprised to come across Richard Lewis enthusing about Exhibition Road:

The application of RDRF should alter peoples' perception that roads are dangerous, thus making them more willing to walk or cycle. Richard gave as an example the proposals for Exhibition Road (to remove all edges, signs etc and to pave it in diagonal squares).


Richard explained the concept of self explaining streets, the design and implementation of which involves the removal of street furniture, lining and excess signage and traffic controls. The idea is to create uncertainty and a sense of risk – so that drivers actually behave safely, and pedestrians and cyclists have the confidence to use the whole street rather than being herded to allocated areas.

Richard Lewis’s thesis that the kind of treatment seen on Exhibition Road results in “pedestrians and cyclists [having] the confidence to use the whole street rather than being herded to allocated areas” seems to me to be completely without foundation.

The notion that drivers "behave safely" on Exhibition Road also seems to me to be bizarre. The speed limit is nominally 20 mph but it is plain that some vehicles are going very much faster than that and there are no physical restraints on excess speed.

Exhibition Road is not the way forward but is rather just another way of accommodating the hegemony of the car to the detriment of both walking and cycling. 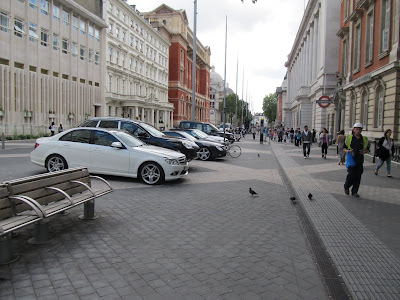 Posted by Freewheeler at 10:42