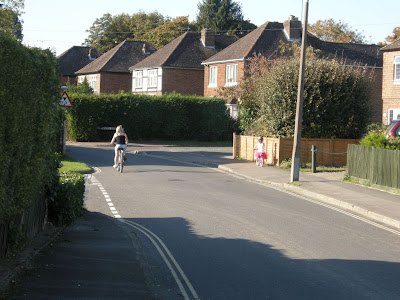 This shocking photograph shows a law-abiding cyclist riding in the road while parallel to her can clearly be seen a helmeted cyclist on the footway approaching a blind corner.

This is a recipe for someone being almost killed or almost hurt. (Photo borrowed from here)

The good news is that in some towns firm action is now being taken to nip child cycling terror in the bud.

Yes, this is Britain.

It may be that

but we want none of that funny foreign nonsense here.

I allude to Stop de Kindermoord.

Or to put it another way, in Britain:

WHERE DO THE CHILDREN RIDE?

And please remember A bicycle ceases to be a toy when it is used on the road. It is a vehicle

and do, also, please, try to avoid cycling over drains and potholes.

Britain's obesity epidemic has left schoolchildren requiring 42in trousers and 54in blazers.

Retailers say they are even supplying primary school pupils with 40in jumpers – a size normally worn by grown men.

The solution, obviously, is to buy a bigger car for the school run.
Posted by Freewheeler at 09:22