In defence of Andrew Mitchell

OK, so the guy has a short fuse, is a millionaire Tory MP, a former investment banker, a snob, and has an exaggerated sense of his own importance. But if we set these minor character flaws to one side (hey, who's perfect?) let’s consider the one thing which has not been discussed in the acres of coverage which have resulted from this storm in a teacup, namely the cycling aspect.

Friends said he had been allowed to cycle out of the main gate on three occasions that day.

Mr Mitchell said in a statement: “I attempted to leave Downing Street via the main gate, something I have been allowed to do many times before.

“I was told that I was not allowed to leave that way.

Why not? The glib explanation was “security”. I don’t believe that for a moment. My guess is that either the same set of cops got fed up with opening two gates for a solitary cyclist, or a new shift from the diplomatic protection squad took over and decided they weren’t going to bother.

As a cyclist Mr Mitchell quite reasonably didn't want to be subject to the equivalent of a CYCLISTS DISMOUNT sign by police officers, who wanted him to dismount and go through this side gate. 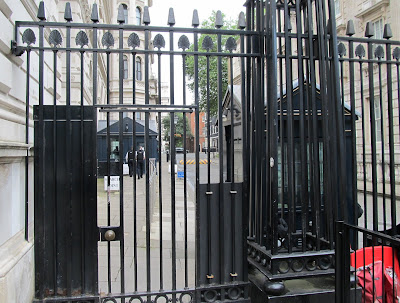 He wanted to go through the main gate, as he had done without incident previously. 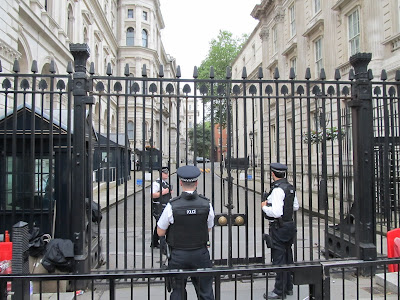 The excuse used to prevent Mr Mitchell going out through the gates – security – was the same feeble excuse wheeled out for the Met’s draconian response to London’s July Critical Mass – an occasion when cyclophobic police officers jeered "Just see them as speed bumps" and "pay your taxes".
We now know that the Met has charged 16 cyclists and taken no action against 166 of those arrested:
‘The whole sorry affair seems to have been a case of an over-zealous police reaction to the general paranoia around the build-up to the Olympic Games. ‘We consider there are potential civil claims for compensation against the police following the mistreatment of our clients and will be taking this further.’
Not that the Met could give a toss. It regularly dispenses vast sums of money for unlawful arrests and a range of other malpractice by its well-protected employees. The Met is car-centric and cyclophobic in its policing priorities. Its initial investigation of this incident said everything you need to know about how seriously the Met takes crime against cyclists, and there's more illumination on this cycling discussion thread. The Met remains a sleazy, dysfunctional and unprofessional force which is long overdue for a good sorting out. The whining of the Police Federation (which is milking this affair for all it's worth in revenge for the Winsor review) is laughable and hypocritical. If the police are upset by rudeness and boorish behaviour they need look no further than their own ranks.
Mr Mitchell may perhaps have also have been stressed by the conditions for cycling in and around Whitehall. And that’s where my qualified sympathy runs out. It’s Conservative politicians who are largely responsible for the atrocious conditions in Parliament Square, a five-lane motor hell. 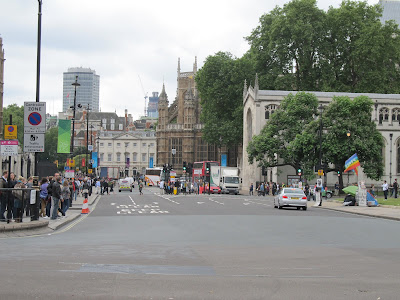 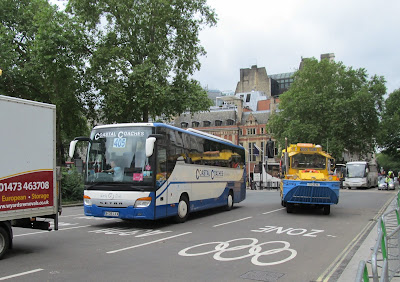 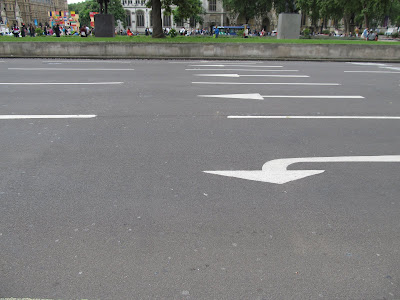 On Whitehall, which used to be an agreeably wide road to cycle on, there’s some new footway widening (below) which forces cyclists into the same lane as buses. Bonkers, and completely unnecessary.

It would be perfectly possible to ‘go Dutch’ on Whitehall and around Parliament Square, although ideally both should be pedestrianised (with cycling access) and with vehicle access severely restricted. 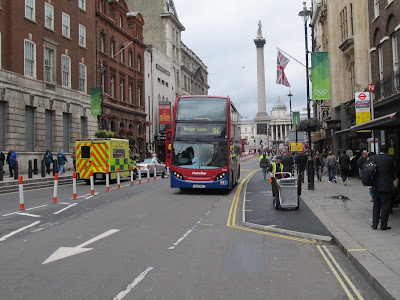 Posted by Freewheeler at 14:37