The scandal of Oxford Street

A businessman left in a coma after being hit by a bendy bus in Oxford Street is campaigning for the road to be pedestrianised.

It’s bizarre and barbarous that streets like Oxford Street and Regent Street aren’t pedestrianised, and that apart from all the buses the motorist is allowed to access all areas. Pedestrians hugely outnumber all other street users, yet the crowds are subordinated to the solitary man in his 4X4 or the expense account BBC manager who can't be bothered to walk half a mile and takes a cab instead.

Buses are a very silly way of travelling around central London and they are high polluters. Buses soak up the suppressed demand for cycling. If central London had the modal share for cycling that it ought to have we wouldn't need so many buses. In any case trams are far more efficient and much more fun to travel on.

For dangerous, vehicle-clogged streets like Oxford Street and Regent Street blame Westminster Council, one of the nastiest, most reactionary and car-centric councils in Britain.

That’s the problem with the Conservative Party – it is so in thrall to the ideology of car supremacism and libertarian motoring that it doesn’t realise that carcentricity, while good for shareholders in the roadbuilding and motor trades, is bad for high street businesses, apart from being bad for health, social cohesion and civilised living. (I don't think it's altogether irrelevant that last year's riots began in a bleak, car-sodden part of north London which is serviced by a hideous gyratory devoted to the supremacy of motor vehicles passing through the neighbourhood.)

In the age of internet shopping it becomes less and less necessary to visit shops if you don't want to, which is why high streets need to be enjoyable, civilised places where you might want to linger over coffee. But London pavement cafes are all too often squeezed in at the edge of the pavement and just a metre or so from a perpetual flow of cars, vans, lorries and cabs.

Oxford Street ought to have fountains in the middle and continental-style cafes. Instead, among other things, it's a sewer for black cabs, a pampered and privileged group who are allowed to clog the streets of central London with their toxic and totally unnecessary presence. There are far too many taxis on the streets of London. London doesn’t need them.

London is a barbarous and backward city which is falling ever behind European best practice. If you want to know how Oxford Street could be civilised, go to somewhere like Nice. Or even Liverpool. 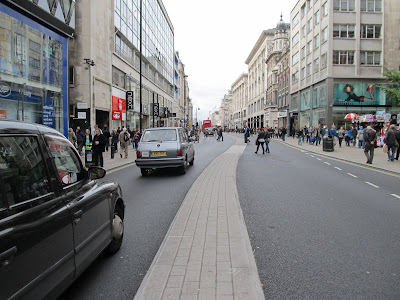 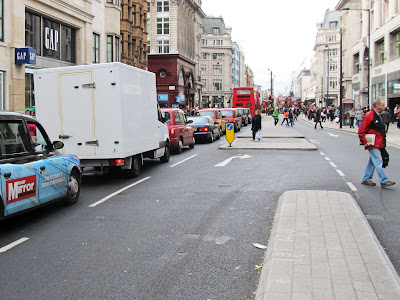 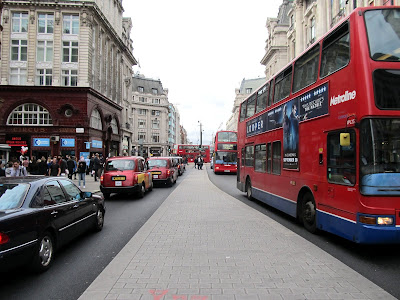 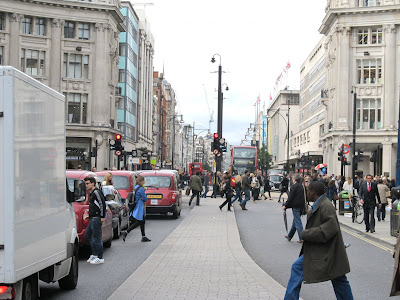 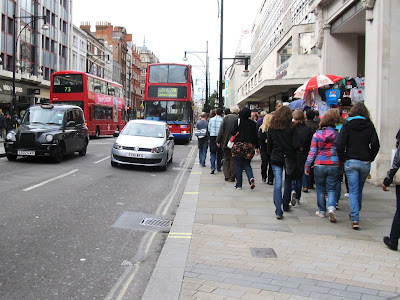 Posted by Freewheeler at 06:32