How not to design a junction to benefit cyclists

There was recently thrilling news from Ipswich with the revelation that

Norman Baker said: “This innovative scheme will make a huge difference to the way people travel around Ipswich and will be a real boon to the local economy by making new business and housing sites more accessible by public transport. Strong transport infrastructure which helps to tackle congestion and reduce carbon will help the city achieve sustainable economic growth.”

No it won’t. This new scheme will NOT make “a huge difference to the way people travel around Ipswich” because Ipswich is as car-centric as anywhere else and it’s a contradiction in terms to “tackle congestion” while purporting to discourage car dependency. In particular this scheme will not get anyone out of their car and on to a bicycle because it does nothing to make Ipswich into a town where cyclists are offered safe, direct routes without conflict with motor vehicles.

Back in 1995 cycling modal share in Ipswich was identified as being 6-7 per cent, with a potential for 30 per cent modal share if Dutch design was emulated.

By 2010 modal share had dropped to 4 per cent (“relatively high for the UK” enthused Sustrans, applying the traditional amnesia found in all branches of UK cycle promotion).

And if you want to know why Sustrans joins the long list of UK cycling promotion organisations which are not enablers of mass cycling but massive obstacles to it, look no further than this report, which asserts that “A wide range of practical interventions have been proven to increase cycling levels, and there is a growing body of evidence on the most effective approaches” – which turn out not to be Dutch practice and infrastructure but “notably from the Sustainable Travel Towns (STT) and Cycling Demonstration Towns (CDT) programmes” – where you encounter the usual percentage froth and spin which UK cycle campaigning adores.

Thrill to cycle-speak: “City-wide measures to increase cycling, such as those implemented in the CDTs, deliver substantially positive BCRs” – although sadly, as is acknowledged later on, “Despite the success of targeted interventions, the PTEs have seen limited impact on the overall mode share of cycling.”

And there’s the rub. UK cycle promotion is always celebrating 40 per cent (or whatever) increases in cycling while in some mysterious alchemical way modal share remains stuck at what it always was, or even declines. This is not surprising when outfits like Sustrans get involved in promoting parochial vehicular cycling solutions with decades of proven failure behind them.

To put it another way Ipswich lost around 35 per cent of its cyclists in the period 1995-2010. This is consistent with the contraction in cycling elsewhere in British towns and cities.

This new £22 million package will do nothing whatever to shift modal share in Ipswich, because Ipswich remains a fundamentally car-centric town with nothing on offer for cyclists but vehicular cycling.

Look carefully at the detail of this new scheme and you will see that it involves the flavour of the month among transport planners, namely widening footways to push cyclists closer to overtaking vehicles and then using the widened footways for parking bays, to add a little extra twist of ‘dooring’ to the cycling experience - as shown here

In time-honoured fashion the local cycling group puts a lot of time and effort into attempting to ameliorate these vehicular cycling solutions and the usual suspects cheer with wild enthusiasm.

And now let’s look at the jewel in the crown of this new scheme, namely the treatment of what is currently a hellish roundabout where the A1022 (Civic Drive and Franciscan Way) meets the B1075 and Princes Street.

The new scheme removes the roundabout and replaces it with a signalled junction, as shown in the projection below (from the perspective of where Princes Street westbound meets the junction with the A1022). 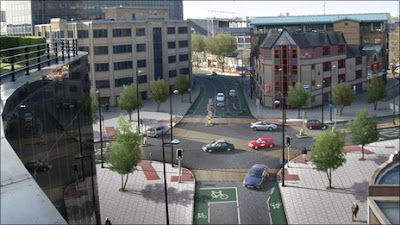 This is not how you design infrastructure for cyclists if you are serious about making cycling a mass means of transport.

In the first place there is nothing intrinsically wrong with roundabouts and the Dutch know how to design them to benefit cyclists.

And if you have to have a signalled junction you should be designing it like the Dutch do, so that Paths taken by cyclists and drivers do not cross. There is no conflict here at all, and that's why it's safe.

This Ipswich “improvement” is no improvement at all for cyclists. Advanced Stop Lines and on-road cycle lanes alongside huge volumes of motor vehicles including lorries and buses are ineffective, subjectively and objectively dangerous, fail to prioritise cyclists and often slow them down, and do absolutely nothing to get non-cyclists cycling. It's predictable that when this scheme is built cyclists will be hopping on to the wide paved areas to take short cuts in order to avoid being delayed at the lights (which are there to manage vehicle flow, not assist cyclists) and because it may well be safer to do this than turn at the junction alongside large or carelessly or aggressively driven vehicles.

At a professional level transport planning for cycling in the UK remains suffused with an ignorant parochialism which is not remotely interested in outcomes, aided and abetted by a cycle promotion culture which is collaborationist to its core and which stubbornly refuses to learn from its own long history of failure.

IPSWICH Hospital is to slash the price it charges patients to park their cars.

Bosses at the Ipswich Hospital NHS Trust revealed yesterday that along with introducing lower charges for longer stays, patients will also be able to park free for 30 minutes in drop off areas. Some ticket prices will be reduced by as much as £1.40.

Jeff Calver, Associate Director of Estate, said the new tariffs were introduced to reflect what patients and visitors have told the hospital in feedback.

He added: “We’ve listened to what our patients, visitors and staff say about car-parking and hope these new changes will greatly improve people’s experience of using the hospital car-parks.
Posted by Freewheeler at 11:30