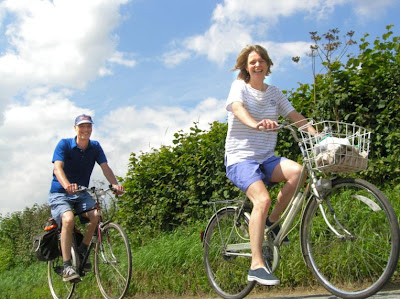 (Above) How York council promotes cycling

(Below) Actual conditions for cycling in York. A cyclist stuck amidst stationary vehicles on Lendal Bridge. 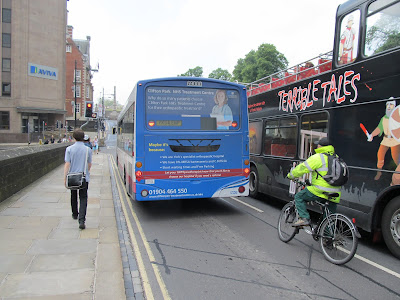 The quick answer to the question "What is York’s cycling modal share?" is: no one knows.

York Council relies on the ten year national census for its assessment of commuter cycling modal share. It makes no attempt to discover what the true modal share figure is for cycling in York overall. You would never know this from the history of British cycling promotion, however. In 2008 the London Cycling Campaign asserted that modal share for York was 19%. According to the CTC between 1991/1993 and 1995/1998 modal share rose from 15 per cent to 18 per cent. These last figures can only refer to general modal share (since the general share is always less than the commuter share, and the commuter share in the 1991 census was 18 per cent). However the picture given of cycling becoming more popular in York in the 1990s was dealt a blow by the results of the 2001 census, which indicated a commuter modal share of 13 per cent.

If York lost over a quarter of its commuter cyclists between 1991 and 2001 it is not remotely credible that utility cycling boomed over the same period. There is always quite a gap between commuter cycling share and utility cycling share, so if York’s rate for commuting was 13 per cent than it seems highly unlikely that overall modal share was higher than ten per cent.

[Richard Lewis] spoke of a planning and design hierarchy of road user groups with the needs of pedestrians, and cyclists considered first, and private motor cars last. He told us that the city of York had made many improvements on the basis of this hierarchy and as a result the number of collisions has reduced by a third, and cycling and walking have both increased. Cycling in York now accounts for 20 per cent of journeys compared with just two per cent in London.

I find this statistic baffling and I can find nothing to support it. It would indicate a continuous rise in cycling in York, something not borne out by other data. Nick Cavill and Dr Adrian Davis on behalf of Cycling England celebrated York not as an example of increased cycling but for its glorious and uplifting stagnation:

The 1991 census reported that cycling and walking made up 30 per cent of all journeys to work in York and they still comprised 29 per cent in the 2001 Census.

That’s a misleading presentation however, since a rise in walking’s modal share conceals a dramatic decline in cycling (down from 18 per cent to 13 per cent).

The theory that York’s general modal share in reality probably doesn't exceed 10 per cent at most is reinforced by The Cycling City and Towns Programme Overview (May 2009), which sets out some figures (page 6). Here, for York, the “approximate mode share for cycling (as quoted in towns/cities workplans)” is identified as 10 per cent.

However, commuter cycling may well have slumped since the 13 per cent modal share identified in the 2001 national census. An obscure report which refers to 2007-2008 includes these very interesting figures: (section 6.7, page 16)

For York City it was 8 per cent

Bear in mind that these are the very highest figures available for commuter cycling at its most popular time of day. The figures for utility cycling would be somewhat lower. The available figures appear to indicate that at best, cycling is stagnating in York; at worst it is declining. Either way, it is a failed city for cycling, which, for such a compact city, ought to have an absolutely massive modal share for cycling.

There are other little indicators of the failure of cycling to grow in York. A “Personalised travel planning” pilot scheme tried out in York in 2005 found that 20 per cent of all trips moved from car to other forms of transport. There was no increase in modal share for bikes (the explanation offered was that commuter cycling was at saturation levels, which is somewhat ironic in the light of the figures).

York is a city where over a quarter of primary school children would like to cycle to school when only five percent are currently doing so.

For those attending the football ground relocated to the Community Stadium, travelling by bicycle is projected at just 2 per cent.

The instability and wide variation in modal share figures traditionally given for York raises questions of methodology. The census is not a particularly satisfactory tool for determining modal share, as it relies on a single question about mode of travel to work. It assumes that the person filling in the form is accurate and that the census genuinely records all residents, and it also only measures commuter cycling. (The national census is also culturally determined in the data it seeks. It asks questions about motor vehicle ownership but excludes figures for cycle ownership per household.)

A much more satisfactory methodology is the cycle count, but the value of any results is shaped by the location of the count, the number of sites used for counts, the frequency of the counts, and the time of day and month of the year. A wide network of full-time automated counts is arguably the best methodology. Questionnaires also supply useful back-up information about individual travel choices, provided that they are very detailed (as TfL’s are) and provided that the samples are representative of the population (which they may not be).

Modal share is the key statistic in determining how successful a town or city is at creating a cycling-friendly landscape, and it is significant that York Council is not really interested in finding out what its modal share is. The true figure might well be shocking and would give the lie to the widespread promotion of York as a successful and cycling-friendly city.

It is not a coincidence that the usual suspects have always been keen to praise York as a cycling city. The reason, I think is very simple. York supposedly demonstrates how vehicular cycling really can work and be as good as any continental model. York also claims to embody the principles outlined in the CTC’s beloved Hierarchy of Provision (the CTC’s page shows a location in York which supposedly embodied best practice).

categories which are way ahead of

Anyone who believes that York’s transport planning puts pedestrians and cyclists ahead of car drivers belongs either in a lunatic asylum or in the offices of the CTC. Amusingly, the CTC’s new infantile fantasy is obviously a projection of York (it is geographically accurate, with the railway station, the Minster, the river Ouse, and the bridges all where they should be, albeit slightly distorted by hallucinatory drugs) and with exquisite timing York Council has come up with its own infantile transport campaign.

For York ever to achieve the levels of cycling which would be found in a Dutch city of similar size the shallow gimmicks and all the ‘encouraging cycling’ initiatives would have to be ditched and serious cycling infrastructure introduced. That would mean segregated cycle tracks on all the major routes into the city centre (one such route is the site of the most recent and troublingly ambiguous serious collision involving a cyclist). It would also mean closing two bridges to motor traffic, and emptying the car-sodden joke pedestrian zone of its cars and providing through routes for cyclists. Travelling by car around central York would need to be made inconvenient and subordinated to cycling and walking flow. Of course before all this happened it would be necessary to understand what is presently wrong with cycling in York and then to ask for the Dutch-style solutions which would release suppressed demand.

Meanwhile it transpires that in York

Certain parts of the city centre and Fishergate are in breach of European air quality limits designed to protect us from the effects of long-term airborne pollution, for example by nitrogen dioxide.

The Rougier Street/ George Hudson Street area is even worse. Nitrogen dioxide levels are so high here that, for those with conditions such as asthma, there is an immediate risk of health problems.

TRANSPORT bosses in York have not given up on the hope of one day dualling at least part of the city’s northern ring road – even though it could cost up to £150 million.

And for a classic example of the toxic and self-defeating contradiction which lies at the heart of transport planning in York and everywhere else in the UK, there is the aspiration to

• Reduce congestion, so cutting travel times and making York a more pleasant place to live and work
• Encourage more people to cycle and walk by reducing the dominance of the car – thus improving health.


(Below) How cyclists create their own permeability in a car-centric cycling-hostile urban environment such as York.

A cyclist travelling south gets into the fast lane on Piccadilly at the junction with Tower Street. What’s he up to? This is a left-turn only junction, where Piccadilly meets the hellish inner ring road. 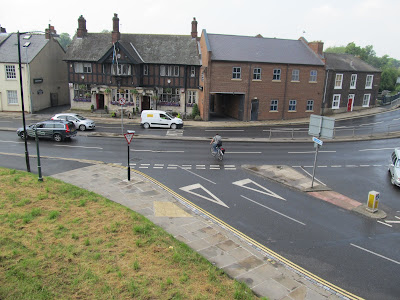 All becomes clear. He wants to turn right. And because the road network is designed to manage traffic flow not help cyclists, he avoids getting locked into a diversion around a gyratory by simply executing a sharp right turn through the gap in the central reservation supplied by an unsignalled and unmarked pedestrian crossing point. 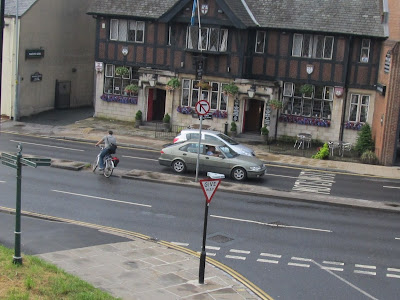 Having made it to the far side he is able to cycle west on the dual carriageway. A solitary cyclist alone in a sea of cars, coaches and lorries. And if a driver should happen to "clip" the cyclist, the railings ensure he'll bounce back into the carrriageway. 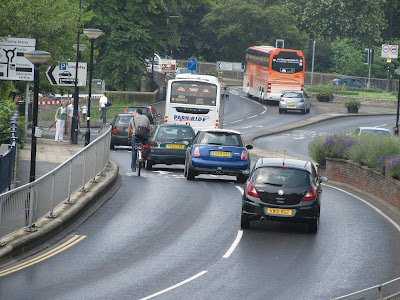 Posted by Freewheeler at 12:40