The Olympics and Paralympics are over and suddenly we are in a bike boom extraordinaire. (Now where have I heard that B word before? And watch out for matters of definition.)

Still, I liked the bit where the Olympic flame came through Waltham Forest and the exuberant crowds poured out into the A503 outside the Town Hall. It was like a Critical Mass for pedestrians as people forced oncoming traffic to a halt and walked against the motor vehicle flow. And one or two cyclists joined in too. 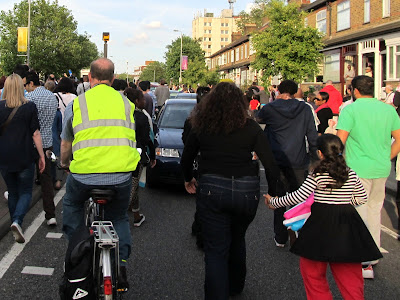 However, once the euphoria wears off, reality returns.

These next two photographs show the Bell corner in Walthamstow, where two very busy A roads cross. This junction has been the scene of numerous crashes and the occasional fatality. When the Olympic flame procession passed through local residents poured out to cheer it on, and wandered out into the road. Car-free, this atrocious junction suddenly felt safe and enjoyable. 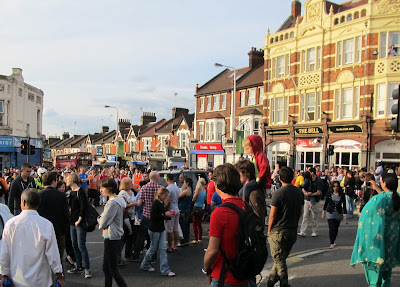 But then the parade went by and within an hour everyday car-centricity was restored. 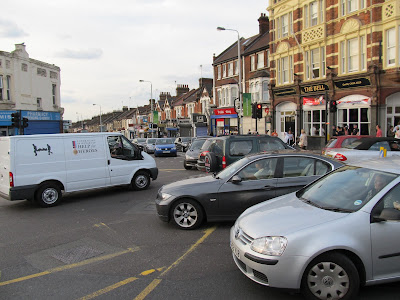 And now all that’s left for local cyclists is the Olympic heritage, like the million-pound-plus refurbishment of Ruckholt Road in Leyton (below), which cleverly fuses pinch points, lorries, vans, speeding drivers, and a beautifully refreshed cycle lane. This is part of the London Cycle Network and with cycling infrastructure like this who can doubt that cycling is really set to boom?

While I was taking this photograph a teenage cyclist went past – on the pavement. Just what is it that's wrong with the youth of today that they don't seem to like cycling infrastructure designed by highly qualified professionals? 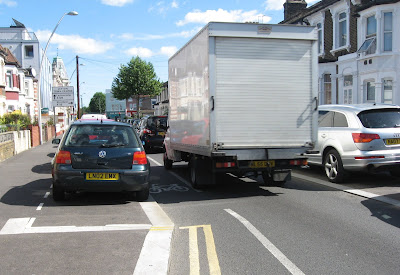 Posted by Freewheeler at 10:46