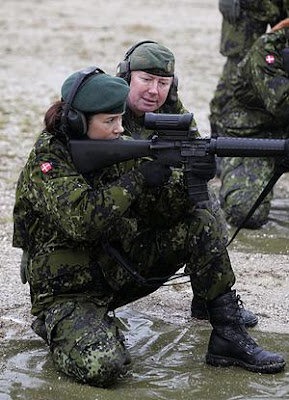 A delightfully informal picture of Crown Princess Mary of Denmark, as she improves her shooting technique

Crown princess Mary found herself unintentionally turning heads yesterday when she was involved in a collision with a cyclist in the tony Østerbro district. According to eyewitnesses, Mary, driving with two of her children at the time, appeared to be completely taken by surprise

[ Note: only one un-named eyewitness is cited in this report ]

as a female cyclist crashed right into the side of the family's bronze Land Rover as the car made a right-hand turn.

[ I hate people who drive Land Rovers in cities. Nobody apart from a farmer needs a Land Rover, least of all to transport their kiddies around dense urban areas. Land Rovers also tend to be very badly driven because, as risk compensation theory points out, cars which protect drivers personally from the consequences of reckless behaviour tend to be cars which are driven without consideration for their impact on others. ]

“The cyclist seemed to almost be lost in her own world. It’s like she didn’t even see the car,” a construction worker who saw the accident unfold from the scaffolding nearby told the tabloid BT.

[ No, surely the cyclist had a momentary lapse of attention, the sort of thing that could happen to anyone. And anyway I expect the Land Rover just came out of nowhere. ]

The woman, said to be an “older woman”, was not injured in the collision, but the rear wheel of her bike was reportedly damaged.

[ The rear wheel. Eh? If the woman collided with the Land Rover why was it only the rear wheel that was damaged? ]

The court has since confirmed that Mary was involved in the incident, and that the crown princess had contacted the cyclist to ask how she was doing. The royal family has also said it would pay for any damages done to the bike.

[ This might be smart PR (aren’t royal families wonderful and kind and generous and super nice) or it might just be an admission of guilt. ]

The junction where the incident occurred is said to be notorious for its collisions between cars and bicycles.

[ But surely Copenhagen is paradise and some influential cycling campaigners believe that the Copenhagen model is more realistic for London than the Dutch model. So please don’t mention important differences between Danish and Dutch design or that cycling is under strain in Copenhagen, with numbers evidently in decline. ]
Posted by Freewheeler at 10:13