Some versions of cycle campaign history


Apparently the reason why cycle campaigning has never achieved much in Britain is because in the middle years of the final decade of the last century some intransigent campaigners insisted that segregation was the way forward:

At the very moment when we needed to focus on securing funding for the NCS [National Cycling Strategy], and integrating it into a wider policy framework which supported cycling, the cycling lobby instead broke into a big argument about segregation. This merely provided Whitehall with a perfect excuse to allocate no funding to cycling – “if cyclists can’t agree what they want, what’s the point of funding it?” In other words, we allowed ourselves to be divided and ruled. Hence the NCS never got anywhere near achieving its targets (which were then abandoned c8 years later), and we’ve been living with the consequences ever since.

This is a version of cycle campaign history which often pops up in comments boxes to dampen down criticism of the UK cycle campaign establishment. I’ve never been able to find any on-line evidence that there was a big, mainstream debate about segregation in cycle campaign circles at a national level in the mid-1990s, nor is it clear to me how such a debate can have been formally expressed in such a way that Government funding was promptly terminated to ‘cycling’ (this term also lacks clarity).

On the contrary, my impression is that the Big Three (i.e. the CTC, the London Cycling Campaign, and Cyclenation) have historically shown no interest in segregation at all, that national cycle campaign conferences have traditionally focused on asserting that cycling is healthy, that it is statistically safe, that the place for cyclists is on the road, that traditional vehicular cycle campaigning is getting results and that cycling is perpetually on the brink of finally expanding in a significant way. In this scenario John Franklin has always been a revered figure, whose authority on cycling infrastructure and cycling best practice have been widely and respectfully cited. But maybe I’ve missed something.

Unfortunately I have been unable to locate any on-line national cycle campaign archives dating back to the pre-digital 1990s. What is easily available are the Cyclenation conference archives which, though patchy, provide an illuminating insight into the priorities of UK cycle campaigning in the first decade of this century – priorities which I would define as vehicular cycling campaign business as usual.

I am unable to make Roger Geffen’s version of campaign history gell with that of David Arditti’s fascinating history of the Camden cycle tracks, in which, at the end of the last century, a solitary campaigner, Paul Gannon, galvanized an LCC branch with his knowledge of Dutch cycling infrastructure. Under his tutelage this branch then achieved practical success at a local level in creating safe segregated cycle tracks in central London. This project, however, was never completed and it encountered many obstacles.

David Arditti argues that the crucial factor which blocked the creation of a network of cycle tracks in central London was the hostility of the vehicular cycling campaign establishment – that same establishment which turned a blind eye to the Dutch template for decades.

Roger Geffen’s argument that dissent within the campaign community centered around segregation was instrumental in the collapse of the National Cycling Strategy also does not gell with this alternative account:

When we look back even further, to the mid-1990s, we recall how the CTC declared the battle for minds won.

The government at last agreed to take account of cyclists' needs, to encourage people to take up cycling, to save the nation's health, to cut congestion and therefore pollution. Campaigners thought that at last, cycling was to have its day.

But no. It never happened, not even when the National Cycling Strategy was created under the Conservatives in 1996, and launched with a huge press conference in London.

This was the first ever transport strategy, a historic moment. A breakthrough, at last. But there was a catch. There was no money for it! I recall transport journalist Christian Wolmar demanding Sir George Young, the secretary of state for transport, to tell us where the money was. "Well, where is it?" said Wolmar. "Where's what?" replied Sir George, a lifelong cyclist, by the way. "The money, there's no money," countered Wolmar.

Sir George told us it didn't need any money as such, because transport planners would be required to include cycling within the budget already provided for general transport development. It never happened, not on a realistic scale. In fact, when, to induce local authorities to apply for grants to build ‘integrated' transport facilities, such as for cycling, many of the local authorities siphoned the money off into ordinary road building schemes.

The government raised hopes yet again by endorsing a brilliant design guide, setting out how to build a cycling infrastructure into the road system. Turns out this is as close as it would get to emulating the best of what we see abroad. So what happened next? Nothing. Local transport engineers took no notice of the guidelines.

If this account is to be believed, the parable of the intransigent and quarrelsome segregationists has no basis in fact. Quite what Roger Geffen is alluding to is highly obscure but whatever its substance he basically cites it to dampen down continuing criticism of the CTC:

Will we now learn from history, and work together to mobilise the political support we need for cycling to flourish – or are we condemned to repeat it? Blogs like IBikeLondon and Cyclists in the City have been doing a great job of working with LCC to get cyclists out on the streets in support of LCC’s Go Dutch campaign for more and safer cycling. That is surely more useful than arguing amongst ourselves over whose fault it is that cycling in the UK is still in such a parlous state!

But the parlous state of current British cycling cannot be detached from the history of British cycle campaigning, its vision, and its strategies. Unity is a wonderful thing, but to be unified there has to be an agreed way forward. I am far from persuaded that UK cycle campaigning has yet reached that condition, and in its absence dissent is to be expected.

The real debate we need to have is how to galvanise the political will to reduce traffic volumes and speeds, so as to create space for quality cycle provision, whether segregated or otherwise. That political support is what is so seriously lacking in the UK.

This attracted a critique from As Easy as Riding a Bike:


This is a new one to me. Why do traffic volumes and speeds need to be reduced, before we can consider putting in infrastructure? Can the two not go hand in hand? Geffen makes the argument again, in a later statement -

There’s a genuinely interesting debate to be had about segregation. Moreover, it’s not about the wonderfulness of Dutch and Danish cycle facilities – that bit is mostly pretty obvious. The real question is, what does it take to ensure that segregation is done really well in the UK context, where our traffic laws and driver behaviour are very different, and where our streets that are far more traffic-dominated than Holland and Denmark were back in the 1970s. In that respect, the recent experiences of New York and Seville are much more interesting. It seems that, for segregation to work well, there has to be a really strong political commitment to create space for quality cycling provision, by reducing traffic volumes and speeds, and reallocating roadspace and junction capacity. Otherwise, any attempt to introduce segregation will merely end up marginalising cyclists.

As Easy as Riding a Bike further comments


I think Roger Geffen is blurring together two entirely separate recommendations of the report. The ‘traffic volume’ and ‘speed reduction’ suggestions apply, quite specifically, to non-arterial roads, while the suggestion for separated paths and tracks is along those arterial routes.

It is not at all clear to me why a policy that aims to construct those paths along our arterial networks should have to wait for, in Geffen’s words, ‘space to be created’ by lowering traffic speeds and volumes. You simply take that space away by building the paths in the first place. I’m not saying this is easy to implement politically, but it is surely no easier to ‘reduce traffic volume.’ Indeed, without the construction of the paths, it is equally unclear to me how you reduce traffic volume on arterial roads – this is something that exponents of this ‘strategy’ simply talk about, and then wish away, in much the same way that traffic volume is ‘disappeared’ when it comes to discussions of motor traffic volume in ‘shared spaces‘.

(I find it rather amusing, in fact, that proponents of the construction of cycle tracks on arterial roads are often labelled as unrealistic dreamers by the very same people who think the best way forward is to simply get rid of traffic on urban arterial roads. If we are whistling in the wind, then they must be whispering into a hurricane).

This is unfair. Browsing through the Cyclenation archives I came across this inspiring presentation at a national cycling conference from someone representing progressive cycling-friendly Surrey.

I feel sure this campaign made an absolutely massive contribution to reducing traffic volumes in Surrey (a county where everybody I know there owns at least three cars).

Yes, asking motorists to consider their conscience and think about our smiley planet is a surefire route to traffic reduction innit. 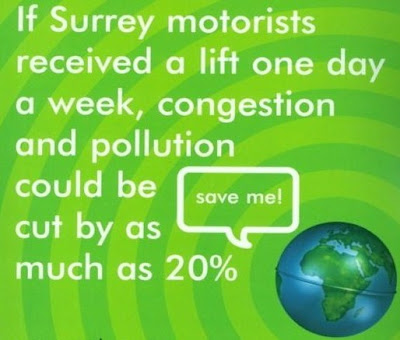 Posted by Freewheeler at 18:31