Footway widening and cycling in London 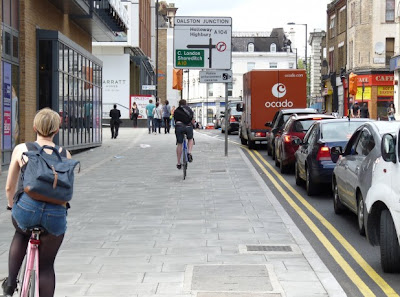 The consequences of footway widening at Dalston junction in Hackney


London has a problem. Plenty of us have worked out what needs doing to truly transform this big, sprawling city into one where cycling is safe, convenient and attractive and where modal share would be massive. But significant sections of the cycle campaign community remain committed to the philosophy of sharing the road, and only seek reforms which would make that sharing a bit less unpleasant for the very narrow and unrepresentative section of London’s population which does cycle on the capital’s roads on a daily basis.

And outside the narrow, tiny world of cycle blogging and discussion threads are London’s transport planners, who aren’t taking a blind bit of notice of anyone. But they like to think of themselves as progressive and rational, and out of that emerges the latest enthusiasm, footway widening. Footway widening is good for pedestrians and can be perceived as ‘Green’ and reallocating space from the motor vehicle to the walker. It is the new transport planning orthodoxy. But what is overlooked is its impact on cyclists, who are left sharing an even narrower carriageway with buses, lorries, vans, taxis, motorbikes, and car drivers.

But then why should this matter? The bicycle is a vehicle and belongs on the road, alongside and among motor vehicles – both the CTC and the Green Party agree on this. Besides, as the most influential British cycling philosopher of the past 25 years has observed:

Of course, most roads simply don't have sufficient space to provide wide cycle lanes or good quality facilities. The answer, however, is not to provide whatever might be squeezed in, but to tackle problems (where these really exist) in a different way. In particular, cyclists should be assisted to integrate with traffic through measures such as speed reduction and improved traffic management. In fact, the 'hierarchy of solutions' advocated by DETR/IHT puts these options first, with separate facilities of any kind a last resort. The segregation of cyclists is at best a very controversial subject, disliked by many existing cyclists and giving little real assistance to newcomers. It may well be that they do as much to put people off cycling, by reinforcing the falsehood that cycling with traffic is a 'dangerous' activity.

That’s right, some people have foolishly got the idea that they are at risk from motor vehicles. These poor deluded souls just aren’t accepting the facts:

The main cause of cycling casualties is not motor traffic but bad surfaces, probably accounting for more than 80 per cent of injuries.

So why should it matter if footways are widened? From a vehicular cycling perspective it doesn’t. But of course there are plenty of cyclists who don’t enjoy cycling in heavy traffic or coming into close proximity to motor vehicles and adapt their behaviour accordingly to minimise its impact on their own perceived safety and convenience. Car-centric infrastructure provokes behaviour like that shown above – cycling on the footway. The story attached to this photograph attracted some interesting comments, not least from Trevor Parsons on behalf of Hackney’s LCC branch. I am not going to comment on any of the comments, as you, dear reader, are perfectly capable of forming your own conclusions.

Hackney Council is not unique in widening a footway in the manner shown above. It’s happening all over Greater London, as well as in the City. Some months ago Cyclists in the City commented:

And now in the City of London a bad situation is apparently going to get even worse.

I’d like to bring to your attention the recently completed rework of the crossroads at Angel / City Road. Going north from St John St which is two lane as it has a bus lane into a now VERY tight one lane as they’ve widened the pavements and the pedestrian refuge at the middle of the road. I now see cyclists on the very busy stretch having to compete with cars and buses to get through the narrow gap before the lights change again. It’s horrible.

It’s happening in Richmond and Waltham Forest and I spotted it recently in Whitehall. 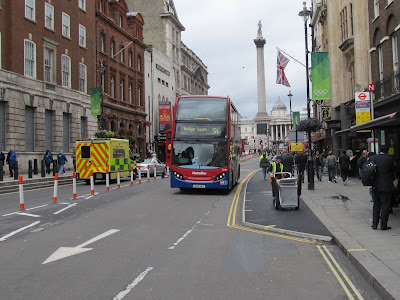 I spotted it last year in progress in Russell Square and then a few weeks later I witnessed the consequences for cycling.

It’s even happened on Montague Place, at the back of the British Museum, where the footways have been widened and the old segregated cycle track (which I’ve always assumed was a spin-off from the Torrington Place/Byng Place track) has been vaporised and cyclists are now back to sharing the road with coaches and lorries.

The London Borough of Waltham Forest was always something of a pioneer in this, except that here the footway widening was for the purpose of creating off-road parking bays. The most recent examples can be found on High Road Leytonstone, where the old cycle lane has been converted into parking bays, and a new cycle lane has been created, closer to buses and lorries.

I see all this as a manifestation of the failure of London cycle campaigning. Conditions for cycling in the capital are actually getting worse, not better.

(Below) High Road Leytonstone, where the old cycle lane has been converted into parking bays. As you can see, there simply isn't the space for a Dutch-style segregated cycle track. 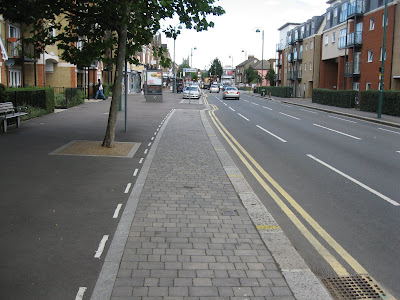 Posted by Freewheeler at 09:45