Cycling on the pavement: the context of a photograph 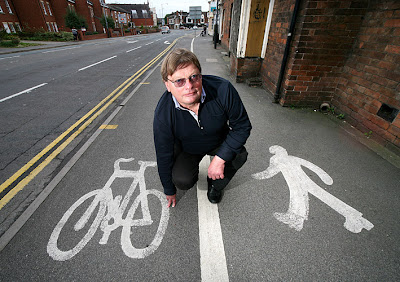 In the sphere of road transport, British newspapers are notable for two things. One is that they persistently construct drivers as victims, mercilessly exploited by ‘road tax’ and oppressed by extra taxes and vicious repression in the form of parking and speed tickets, then further brutalised by greedy council’s parking zones which charge you one or two quid a week for the right to park in the neighbourhood where you live – in fact it’s a marvel anyone can afford to buy a car at all, let alone a People Carrier or an Audi or a 4X4.

The other is that cyclists are persistently demonised as being uniquely badly-behaved, irresponsible rule breakers. The absence of empirical data is of no consequence; the stereotypes are available and most journalists obligingly conform to them.

When not busy jumping a red light and outraging the innate decency of a society where traffic law is regarded with deep reverence by all other road users, our stereotypical cyclist is, of course, riding on the pavement and ‘almost killing’ frail, terrified pensioners. Such offences are compounded by those cyclists who neglect to wear cycle helmets or yellow luminous vests, who are just inviting brain damage and collisions with innocent motorists.

In Stratford (no, not the heart of darkness located in the London Borough of Newham but rather the town notable as the home of Adrian Newey, famous Formula 1 engineer), there is horrifying news of badly behaved cyclists:

It has unearthed a whole range of deeper social issues relating to the debate. Issues which include, intimidation, hostility, socially unacceptable behaviour, human rights, road safety, motoring and the environment.

Yeah, right… Pavement cycling certainly puts such trifles as starvation in Africa or turbulence in the Middle East into perspective.

The story is accompanied by a photo of a school child in uniform cycling on the pavement, and includes the blood-curdling revelation that

According to one motoring organisation - The Automobile Association - selfish pavement cycling is widespread across the country and on the increase.

Yes, who better to offer an objective, scientific analysis of cycling behaviour than the A.A.?

The other photograph used to illustrate the story is the one shown above. For the full story the reader is invited to buy a hard copy of the newspaper (smart move) but as I’m not in Stratford-upon-Avon I am unable to do so. However I guess that the pedestrian campaigner in the photo is indignant that half the footway has been appropriated for cyclists. And I wouldn’t disagree. This is classic crap British off-road cycling infrastructure of the kind that very few cyclists like, and which makes it difficult for CTC members to sleep at night for fear they will be herded by law onto such cycle paths by big brutal men wearing Dutch police uniforms.

Although not identified, the photo shows a section of the Birmingham Road (A3400) between the junctions with Arden Street and Windsor Street. As infrastructure it is not exactly a gift to cyclists: see if you can spot what is wrong, both in the photo below and in the Google streetview picture. 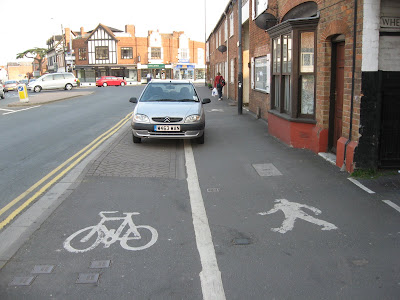 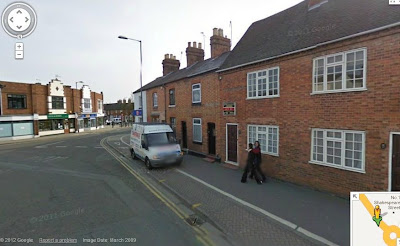 This crap cycle path (which naturally requires cyclists to give way at every side road) illustrates the absurdity of transport planning in Stratford. Permissible pavement cycling on so-called ‘shared use’ footways is the first resort of the car-centric planner who is unwilling to reallocate road space to cyclists. It is irrational to invite cyclists on to footways in some parts of Stratford, and then to express indignation when it occurs elsewhere. If you won’t plan for cyclists, then some will take unilateral action to ensure their own safety and convenience. It’s the stupid infrastructure.

The Birmingham Road is a classic example of a direct, primary route into an urban centre which ought to have segregated cycle paths built to the high standards that the Dutch manage. This is how the Dutch moved away from car-centricity in the 1970s and it’s the only way it will happen in Britain, even if just about everyone involved in cycle campaigning and transport planning remains in deep denial.

Oh but I was forgetting. In a quaint old Tudor town there just isn’t the space, is there?

This is another part of the Birmingham Road, not far from the earlier location. When I think of how sites like this could be I want to weep, I do really. 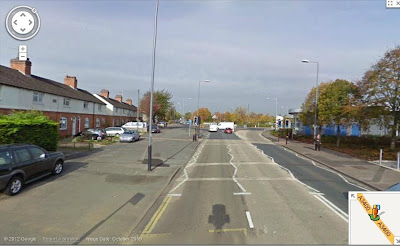 Naturally Stratford Council and the local police are not remotely concerned when local residents take over the pavement for private car parking, as here on Bull Street (below). Complete obstruction of the footway, though illegal, will attract no censure from any passing PCSO, police officer or council official. And curiously, all those apoplectics who get worked up about cyclists on footways are strangely silent in the face of such daily appropriations. 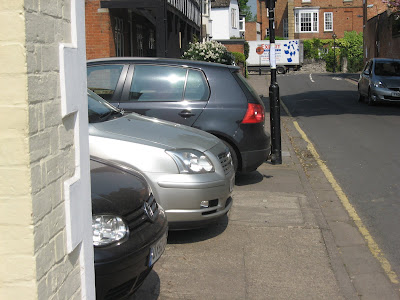 Posted by Freewheeler at 09:56